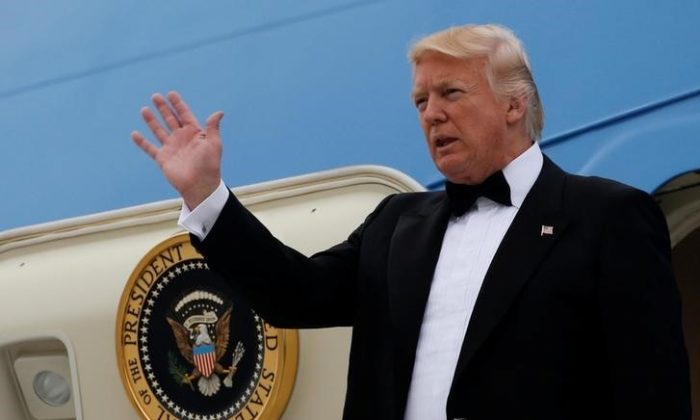 President Donald Trump arrives aboard Air Force One at JFK International Airport in New York on May 4, 2017. (REUTERS/Jonathan Ernst)
News

WASHINGTON—President Donald Trump will visit the Western Wall in Jerusalem, Judaism’s holiest prayer site, the White House said on Monday amid controversy in Israel over reported comments by a U.S. diplomat that the wall was in the occupied West Bank.

Trump will say a prayer at the Western Wall, national security adviser H.R. McMaster said, as well as pay a visit to the Church of the Holy Sepulchre, considered by Christians to be the site of Jesus’ tomb.

The wall, representing the remains of the Jewish Second Temple, sits on territory Israel captured in the 1967 Middle East war and has been a flashpoint of violence in the Israel-Palestinian conflict.

Israel will be the second stop on Trump’s first foreign trip, following Saudi Arabia. The Republican president will meet with Israeli President Benjamin Netanyahu in Jerusalem and Palestinian leader Mahmoud Abbas in the West Bank city of Bethlehem.

The announcement of Trump’s visit to the Jewish holy site came amid the controversy in Israel over a report that a U.S. diplomat preparing Trump’s visit referred to the Western Wall as being part of the Israeli-occupied West Bank.

Israel’s Channel 2 reported that during a planning meeting between U.S. and Israeli officials, the Israelis were told that Trump’s visit to the wall was private, Israel did not have jurisdiction in the area and that Prime Minister Benjamin Netanyahu was not welcome to accompany Trump there.

Israel considers all of Jerusalem as its indivisible capital, a claim that is not recognized internationally.

An official in Netanyahu’s office said on Monday that Israel has contacted Washington about the matter.

Asked about the matter, a White House official told Reuters on Tuesday: “These comments were not authorized by the White House. They do not reflect the U.S. position and certainly not the president’s position.”

McMaster sidestepped questions on Tuesday about whether the Trump administration considers the Western Wall part of Israel.