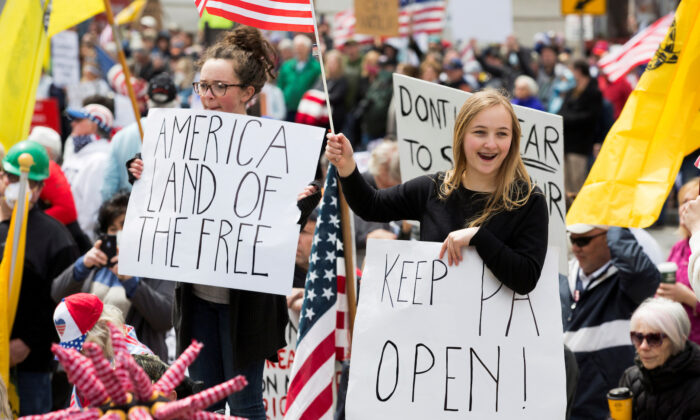 Demonstrators gather to protest against the state's extended stay-at-home order to help slow the spread of the CCP virus (COVID-19) in Harrisburg, Pennsylvania, on April 20, 2020. (Rachel Wisniewski/Reuters)
Politics

President Donald Trump will visit the battleground state of Pennsylvania on Thursday, as Gov. Tom Wolf struggles to contain mounting resistance to his COVID-19 lockdowns.

With the pandemic devastating the economy, the Trump administration has sought to strike a balance between protecting lives and ensuring livelihoods, with White House messaging increasingly focused on encouraging state governors to ease restrictions.

The president has accused some Democrat state governors, including Wolf, of dragging their feet in restarting economic activity. Around 2 million Pennsylvania residents have lost their jobs since mid-March.

“The great people of Pennsylvania want their freedom now, and they are fully aware of what that entails,” Trump wrote in a tweet Monday. “The Democrats are moving slowly, all over the USA, for political purposes. They would wait until November 3rd if it were up to them.”

Trump is expected to visit a medical equipment distributor outside Allentown on Thursday. It will be Trump’s 18th trip to the state as president, a marker of Pennsylvania’s importance to his reelection hopes. A White House spokesperson cited by the Philadelphia Inquirer said the president is expected to deliver remarks on COVID-19 testing.

Wolf, a Democrat, is facing a growing revolt over his stay-at-home orders and business shutdowns.

State Republicans passed legislation in April to limit Wolf’s powers during the disaster emergency, which he vetoed. Egged on by state GOP lawmakers, counties have threatened to defy his orders while at least a few business owners have reopened despite his warnings.

Wolf, meanwhile, has argued he is just trying to keep people safe.

“The dangers associated with #COVID19 may not be readily visible to all, but they are present. We are fighting a war that has taken the lives of too many people. And we’re winning. The politicians who are encouraging us to quit the fight are acting in a most cowardly way,” he wrote in a tweet.

On Monday, Wolf threatened to hit businesses that violate his lockdown order with penalties, including loss of operating licenses, difficulties with insurance, or getting cut off from relief funds.

“I won’t sit back and watch residents who live in counties under Stay at Home orders get sick because local leaders cannot see the risks of #COVID19 and push to reopen prematurely,” Wolf said on social media after his press conference.

Pennsylvania is 10th among states in overall infection rate—with some 59,000 confirmed cases, which have been trending down.

Wolf has so far allowed 24 counties to move into the so-called yellow phase of reopening, which lets most businesses reopen but retains some restrictions, including on social gathering.

While another 13 counties are due to move into that stage on Friday, no Pennsylvania counties are in the unrestricted green phase.

However, some politicians in counties that are in the red phase, which are still subject to the restrictive stay-at-home order, have said they would move into the yellow phase even if it’s against the governor’s will.

Around two-thirds of Pennsylvania’s 12.8 million people are expected to remain under stay-at-home orders past this week.