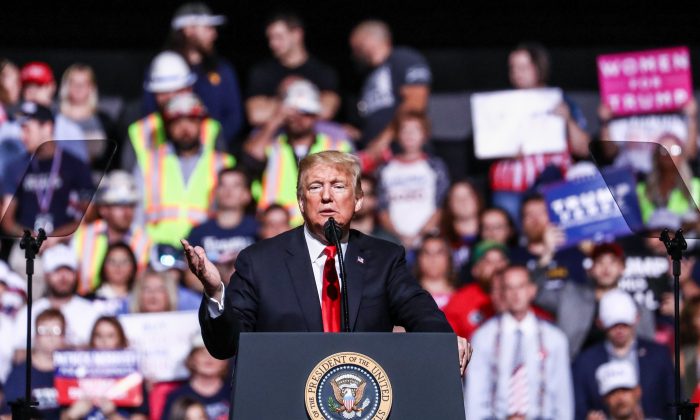 President Donald Trump will preside over a meeting with leaders of large internet and social-media companies as well as some critics of those companies, according to National Economic Council Director Larry Kudlow.

The summit should be held in the coming weeks, and Google CEO Sundar Pichai committed to participating when the two met last week, Kudlow said.

“We had a great meeting, great meeting. I admire him, respect him, very constructive back and forth,” Kudlow said of Pichai. “He was extremely cooperative. I really enjoyed it, and he committed to come back to the White House.”

Calling the planned meeting “a little conference,” Kudlow said the hope is to have Twitter and Facebook also participate.

“We will have the big internet companies, the big social media companies, search companies, and some who are dissatisfied with those companies,” he said. “I don’t know if we’ve set a date yet, but I reckon it’s going to be around the middle of October.”

Trump has criticized tech giants such as Google, Facebook, and Twitter over reports that they’re biased against conservatives. In an Aug. 28 tweet, he accused Google of shutting out “Republican/Conservative” and “Fair Media” from Google News searches.

“Very dangerous,” he said, in a subsequent tweet. “Google & others are suppressing voices of Conservatives and hiding information and news that is good. They are controlling what we can & cannot see. This is a very serious situation-will be addressed!”

Kudlow previously told reporters that the White House was “taking a look” at Google, saying the administration would do “some investigation and some analysis,” without providing further details.

Trump’s tweets came after PJ Media reported that among the top 100 search results for “Trump” on Google News, 96 percent of them were from left-leaning media.

The Epoch Times conducted a similar experiment on multiple dates. On the afternoon of Oct. 2, less than 5 percent of the 154 articles featured on the first 10 pages of search results for “trump” came from traditionally conservative-leaning media. Three from Fox News, three from The Wall Street Journal, and one from The American Thinker. The rest were from sources that, to varying degrees, traditionally lean left.

Google has denied political bias in search results, saying the employees were only brainstorming, and their ideas weren’t implemented.

On Oct, 1, The Epoch Times reported that YouTube, a subsidiary of Google, omits from its search suggestions the most popular channel focused on Chinese politics, “China Uncensored.” It appears, though, that this is not because of Youtube’s targeting of the channel, but because Youtube associates the word “uncensored” with search queries of adult content, which are filtered.

Google responded to a request for a comment on the issue, but didn’t provide one.

Trump criticized Twitter in July, when the company faced allegations of shadow banning, that is suppressing content of users without informing them.

“Twitter ‘SHADOW BANNING’ prominent Republicans. Not good. We will look into this discriminatory and illegal practice at once! Many complaints,” Trump said in a July 26 tweet.

At the time, several Republican congressmen had their Twitter accounts scrapped from the platform’s search suggestion function. When questioned by some media in July, Twitter corrected the situation and said some accounts of liberals were affected too. But, despite extensive testing, media uncovered only four affected lawmakers—all of them Republicans.

Another method of shadow banning is the so-called “quality filter,” which removes affected Twitter accounts from the “latest” category of search results.

But around Aug. 31, just before Twitter CEO Jack Dorsey testified before Congress, Trump supporters began reporting that their accounts no longer appeared to be affected by the filter.

Twitter employees have previously told undercover reporters that the platform has unwritten rules and a company culture that at least condones suppressing conservatives.

One of the company’s engineers, Pranay Singh, was caught saying that most algorithms that were supposed to identify automated “bot” accounts, in reality, targeted Republicans.

Dorsey acknowledged in congressional testimony that algorithms that Twitter uses to filter content may be unintentionally biased.