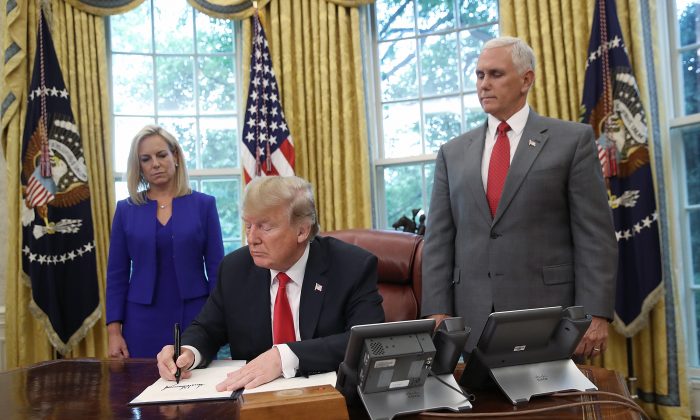 WASHINGTON—President Donald Trump signed an executive order on June 20 that he says will help stop the separation of families at the southwest border.

The main action in the order is a demand that Attorney General Jeff Sessions promptly file a request to the U.S. District Court for the Central District of California to modify the Flores Settlement Agreement.

The 1997 Clinton-era Flores agreement is a court ruling that says families who cross the border illegally must be detained for no longer than 20 days—which means they then have to be released into the interior of the United States with a court date set for possibly years down the road.

“This creates a ‘get out of jail free’ card for illegal alien families and encourages groups of illegal aliens to pose as families hoping to take advantage of that loophole,” said the Department of Homeland Security (DHS) in a factsheet on June 18.

DHS said it increased its capacity for detaining families in 2014 and held families pending the outcome of immigration proceedings. This coincided with a surge of migrants from Central America who crossed the southwest border illegally.

In 2016, the Flores agreement was amended to say that minors cannot be detained in an unlicensed facility for longer than 20 days and must be either released or transferred to a licensed facility.

“Because most jurisdictions do not offer licensure for family residential centers, DHS rarely holds family units for longer than 20 days,” DHS said.

This meant the custody of minors had to be transferred to Health and Human Services and the minor reclassified as an unaccompanied minor.

The 2016 ruling made it “much more difficult for the federal government to use the detention authorities Congress gave it,” DHS said.

Trump has asked Sessions to request a change to Flores that would permit DHS to detain families together throughout their criminal proceedings for improper entry, or for any removal or other immigration proceedings—under present resource constraints. The exception would be if a child’s welfare was at risk.

The president has asked the Secretary of Defense to provide extra detention facilities that can house families, upon request by DHS. He also said to construct more facilities as needed.

Speaking at the 75th anniversary celebration of the National Federation of Independent Business on June 19, Trump expressed his desire to solve the problem.

“I don’t want children taken away from parents. And when you prosecute the parents for coming in illegally—which should happen—you have to take the children away,” Trump said.

Parents will not be prosecuted, and therefore separated, if they enter through a port of entry to claim asylum, rather than cross illegally.

“We can either release all illegal immigrant families and minors who show up at the border from Central America, or we can arrest the adults for the federal crime of illegal entry,” he said.

He wants Congress to legislate a third option, which two House bills provide—both of which may be up for vote this week.

“What I’m asking Congress to do is to give us a third option, which we have been requesting since last year—the legal authority to detain and promptly remove families together as a unit,” Trump said. “We have to be able to do this.  This is the only solution to the border crisis.

Right now, a disturbing trend shows that children are being used to cross the border illegally with adults, who will then claim asylum as a family unit and hope to be released into the interior of the United States more quickly.

Immigration and Customs Enforcement Deputy Director Tom Homan said on May 7, “We’ve got intelligence that alien smuggling organizations are making children available to single adults so that they can come and claim to be a family unit and not be detained.

“We have situations where the same child has crossed the border several times in a time period with people claiming to be the parent. So obviously, there’s been trafficking.”

In fiscal year 2017, the U.S. Department of Homeland Security saw 46 cases of children being used fraudulently by adults crossing illegally. In the first five months of fiscal 2018, 191 cases have been reported.

The TVPRA doesn’t allow the United States to refuse entry to children who are not from Mexico and send them back into Mexico—hence the high numbers of Central American migrants entering illegally as family units or unaccompanied minors and claiming asylum. Only about 20 percent of asylum cases are eventually granted approval by a federal judge.

Trump accused Democrats of not wanting to solve the problem. “because Democrats love open borders.”

“It’s destroying our country,” he said. “They view that as potential voters. Someday they’re going to vote for Democrats. Because they can’t win on their policies, which are horrible.”

Trump visited House GOP members on the afternoon of June 19 to discuss the two immigration bills that may come up for vote this week.

The Securing America’s Future (SAF) Act, introduced in January by Rep. Bob Goodlatte (R-Va.), has not yet secured the required 218 votes, so the second bill, the Border Security and Immigration Reform Act of 2018, was introduced on June 14 as a compromise.

They both “build the wall, close legal loopholes, cancel the visa lottery, curb chain migration, and solve the border crisis and family separation issue by allowing for family detention and removal,” Shah said.

House homeland security committee chairman Michael McCaul said the president “is a thousand percent” behind the new bill, adding that families will not be separated if the bill passes.

Trump took the time to lambast Mexico in his speech on June 19.

Most of the children and families hail from Central America and travel north through Mexico before crossing the United States border illegally.

The president has said that Mexico should control its southern border more tightly and that it should itself accept the Central Americans as asylees.

“Mexico does nothing for us,” Trump said. “They could stop it. They have very, very strong laws. Try staying in Mexico for a couple of days. See how long that lasts.”

Note: This article has been updated to include the contents of the executive order.