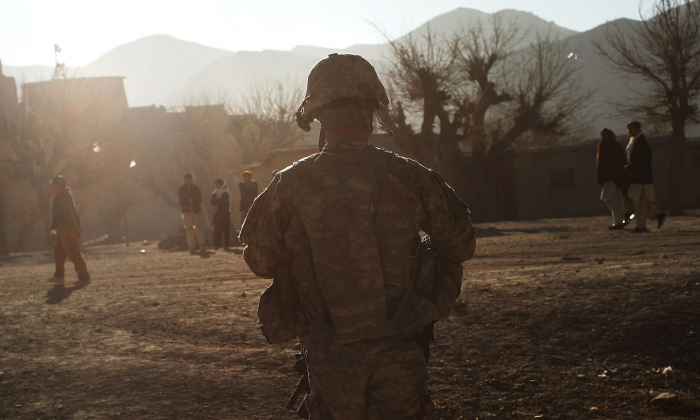 US Army soldiers enter the village of Pushtay in Afghanistan on Jan. 9, 2010. (Spencer Platt/Getty Images)
International

President Donald Trump announced Dec. 16 that he will review the case of a former U.S. Army Green Beret charged with the murder of an alleged terrorist bomb-maker during a deployment in Afghanistan in 2010.

Maj. Matthew Golsteyn has twice admitted to shooting an Afghan man he suspected was a bomb-maker for the Taliban terrorist group—first during a job interview with the CIA and then again in an interview with Fox News.

Golsteyn’s charges had previously been dismissed through an administrative process, according to his attorney, Phillip Stackhouse. But a spokesman for the U.S. Army Special Operations Command said in a statement that “Golsteyn’s immediate commander has determined that sufficient evidence exists to warrant the preferral of charges against him.”

“At the request of many, I will be reviewing the case of a ‘U.S. Military hero,’ Major Matt Golsteyn, who is charged with murder,” Trump wrote on Twitter on Dec. 16. “He could face the death penalty from our own government after he admitted to killing a Terrorist bomb maker while overseas.”

Stackhouse thanked the president in a Twitter message and vowed to fight “relentlessly” to defend his client. Golsteyn could face the death penalty if convicted.

“MAJ Golsteyn is a humble servant-leader who saved countless lives, both American and Afghan, and has been recognized repeatedly for his valorous actions. We will be relentless in defending him,” Stackhouse wrote on Twitter on Dec. 16.

Golsteyn earned a Silver Star medal for heroism in leading an 80-man unit in a fight with the Taliban in Marjah, Afghanistan, in February 2010. Golsteyn repeatedly exposed himself to the enemy while rescuing a wounded Afghan fighter and called in airstrikes on the terrorist position, according to Stackhouse.

The Army revoked Golsteyn’s medal in 2015 after he was investigated for the alleged murder.

“How unfortunate. The career of a decorated soldier and everything he has accomplished over a nearly fifteen-year service career has been taken away. The reason: an allegation that the Army was never able to substantiate,” Hunter wrote in the Daily Beast. “That’s no way to treat one of America’s top soldiers.”

Golsteyn’s wife, Julie, defended her husband in an interview on Fox News on Dec. 16, telling the host that the charges against her husband are “disgusting” and that he has been “ripped apart by his own government.”

“It is extremely disappointing and absolutely reprehensible what they have done to him,” she said. “For them to charge him with premeditated murder is almost laughable, and it would be laughable if it wasn’t so serious and disgusting.”

Golsteyn has said that he killed the Afghan bomb-maker after having to release the man from custody due to a 24-hour detention limit. Golsteyn suspected the man was responsible for a bomb that killed two U.S. military service members.