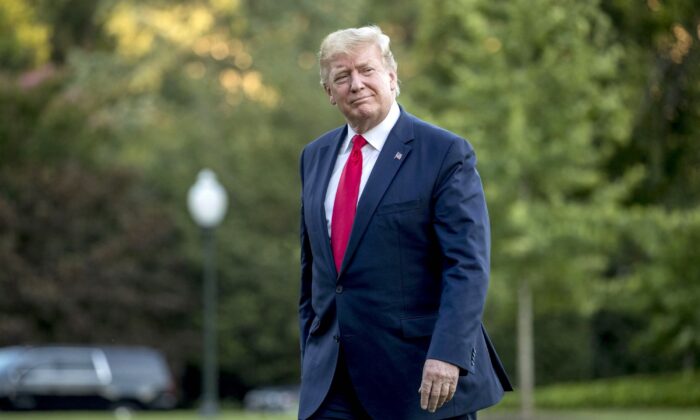 President Donald Trump walks across the South Lawn as he arrives at the White House on June 30, 2019. (Andrew Harnik/AP Photo)
Trump Administration

Trump to Release Financial Records Before Election: ‘Much Richer Than People Even Thought’

President Donald Trump wrote on Twitter that he plans to release his financial information before the 2020 general elections, and that those documents will reveal that he is more wealthy than people had imagined.

“Bob Mueller, after spending two years and 45 million dollars, went over all of my financials, & my taxes, and found nothing. Now the Witch Hunt continues with local New York Democrat prosecutors going over every financial deal I have ever done,” Trump wrote on Thursday morning.

“This has never happened to a president before,” he added.

…..President before. What they are doing is not legal. But I’m clean, and when I release my financial statement (my decision) sometime prior to Election, it will only show one thing – that I am much richer than people even thought – And that is a good thing. Jobs, Jobs, Jobs!

“When I release my financial statement (my decision) sometime prior to Election, it will only show one thing—that I am much richer than people even thought—And that is a good thing. Jobs, Jobs, Jobs!” Trump wrote.

Trump’s taxes have become the subject of several court cases. The Manhattan district attorney is seeking eight years of tax returns amid a criminal investigation.

Trump, an international real estate mogul and hotel owner, is the first major-party presidential candidate since Gerald Ford in 1976 who hasn’t released his tax returns.

But on Nov. 18, the Supreme Court said it will decide on whether to take up Trump’s appeal.

“It is ordered that the mandate of the United States Court of Appeals for the District of Columbia Circuit, case No. 19-5142, is hereby stayed pending receipt of a response, due on or before Thursday, November 21, 2019, by 3 p.m. ET, and further order of the undersigned or of the Court,” Supreme Court Chief Justice John G. Roberts wrote (pdf).

The president has requested that the Supreme Court protect his financial records from the House and the Manhattan district attorney’s office.

Trump’s attorneys have also sent out a petition last week to the court to overturn a ruling in a New York court regarding Democratic Manhattan District Attorney Cy Vance’s case.