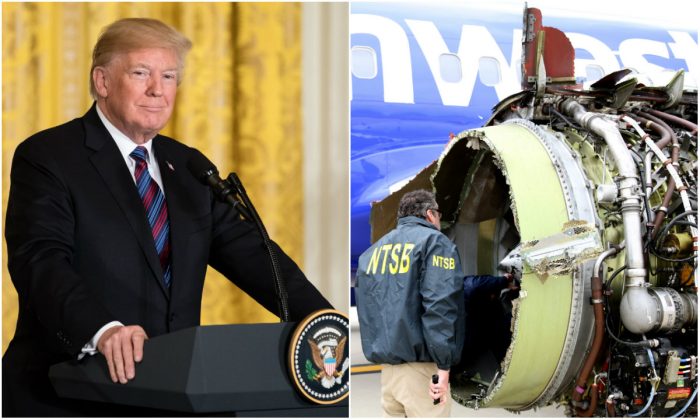 The crew of Southwest Flight 1380 will meet President Donald Trump at White House on Tuesday, May 1.

A White House spokesperson confirmed the planned meeting to Fox News, but not which members of the crew will attend.

The crew performed an emergency landing in Philadelphia after an engine blew on the Dallas-bound Southwest Airlines Flight 1380 about 20 minutes after takeoff from New York’s LaGuardia Airport on April 17. A piece of debris from the engine broke a window on the plane causing deadly injuries to one passenger.

The crewmembers were hailed as heroes, especially Captain Tammie Jo Shults and First Officer Darren Ellisor, for landing the Boeing 737-700 with 149 onboard.

@SouthwestAir These are the hero’s of SWA 1380 NYC to Dallas We lost an engine mid-flight and they guided back to Philly saved 149 on board pic.twitter.com/RNA8sXRBZA

Shults happened to be the first woman to fly F-18s for the U.S. Navy and one of the first female fighter pilots ever for the military branch before becoming a commercial pilot.

This is the HERO who landed that #SWA plane today. Pilot Tammie Jo Shults was one of the first female fighter pilots in the @USNavy and a native of New Mexican. She really saved a lot of lives today. One woman died from injuries sustained when a window blew-out on the plane. pic.twitter.com/H6m3kBtG3b

“She has nerves of steel,” passenger Alfred Tumlinson, a Texas resident, told The Associated Press. “That lady, I applaud her. I’m going to send her a Christmas card—I’m going to tell you that—with a gift certificate for getting me on the ground. She was awesome.”

He continued, “The lady, the crew, everything, everybody was immaculate. They were so professional in what they did to get us on the ground.”

Shults refused interviews after the incident two weeks ago, but on April 19 Southwest Airlines released a statement from her and Ellisor.

“As Captain and First Officer of Crew of five who worked to serve our Customers aboard Flight 1380 yesterday, we all feel we were simply doing our jobs. Our hearts are heavy. On behalf of the entire Crew, we appreciate the outpouring of support from the public and our coworkers as we all reflect on one family’s profound loss. We joined our Company today in focused work and interviews with investigators. We are not conducting media interviews and we ask that the public and the media respect our focus,” the statement reads.

Please see below a statement from the Captain and First Officer of Flight 1380. pic.twitter.com/RjoCpucGGS

An audio recording surfaced on April 18, revealing the conversation between Shults and an air traffic controller moments before the emergency landing.

In the recording, Shults could be heard calmly telling air traffic controllers about the engine failure.

Regulators at the National Transportation Safety Board (NTSB) are investigating the incident in which a fan blade on the left engine’s air intake broke off and caused the engine to blow apart, ejecting shrapnel.

The airline, as well as the jet manufacturer, Boeing, and the engine manufacturer, CFM International, assisted with the investigation.

Since CFM is an American-French joint venture, French regulators have sent its experts to assist with the investigation. The inquiry is expected to take 12-15 months, BBC reported.

At least one passenger is suing Southwest and CFM, claiming the companies had “placed profits and business” over passenger safety and continued to operate the engine “even when there was confirmation that an unsafe condition existed.”

A Southwest flight in August 2016 with the same type of CFM56-7B engine made an emergency landing in Pensacola, Florida, after a fan blade separated and debris ripped a hole above the left wing.

After the incident, European regulators gave airlines nine months to check the engines. U.S. regulators were still considering what to do after proposing some checks.

“Despite knowing of the dangerous condition of the subject aircraft’s engine, the defendants risked the lives of more than a hundred innocent passengers,” the court filing reads.

“Our focus remains on working with the NTSB to support their investigation,” Southwest said on Friday. “We can’t comment on any pending litigation. The safety and security of our employees and customers is our highest priority at all times.”

The April incident marked the first fatality on a U.S. commercial passenger airline since 2009.

CFM is a joint venture of GE Aviation and Safran Aircraft Engines. A representative for GE did not return a request for comment. Safran could not immediately be reached.