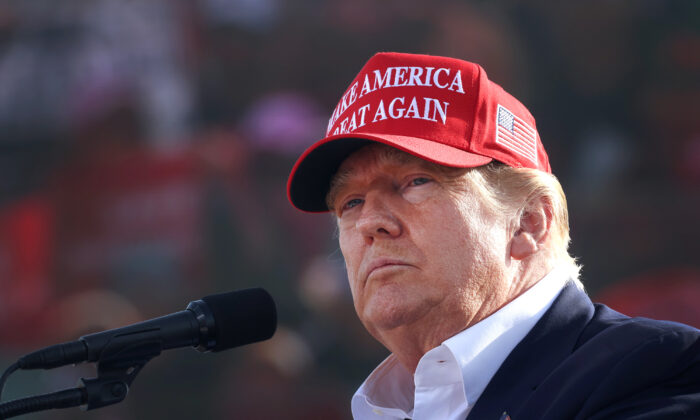 Former President Donald Trump speaks to supporters during a rally at the I-80 Speedway in Greenwood, Neb., on May 1, 2022. (Scott Olson/Getty Images)
FBI Raids Trump Resort

Former President Donald Trump announced on Aug. 19 that a “major motion” will soon come following the FBI’s raid on his Mar-a-Lago resort.

“A major motion pertaining to the Fourth Amendment will soon be filed concerning the illegal Break-In of my home, Mar-a-Lago, right before the ever important Mid-Term Elections,” Trump wrote on Truth Social, less than two weeks after the FBI raid on his home in Florida in search of official records.

“My rights, together with the rights of all Americans, have been violated at a level rarely seen before in our Country,” Trump continued. “Remember, they even spied on my campaign. The greatest Witch Hunt in USA history has been going on for six years, with no consequences to the scammers. It should not be allowed to continue!”

Under the Fourth Amendment, only search warrants that are “reasonable” are legal. It also requires that search warrants be justified by “probable cause” that is “supported by oath or affirmation.”

The search warrant, unsealed on Aug. 12, showed that the Department of Justice (DOJ) was investigating Trump for potential breaches of three U.S. laws relating to the handling of certain records, including defense information and records relating to federal investigations. An inventory list, also unsealed on Aug. 12, showed that FBI agents took 11 sets of documents variously described as classified, top secret, secret, and confidential.

The affidavit filed in support of the search warrant application, which contains the DOJ’s case for probable cause, is currently sealed. While the government has asked the court to keep it this way, saying its disclosure would jeopardize the integrity of a federal investigation, a federal judge in Florida on Aug. 18 said he’s inclined to unseal portions of the affidavit, and ordered government officials to give him a redacted version of the document for its potential release.

One of Trump’s lawyers, James Trusty, said on the Mark Levin show, a radio program, late Friday that the legal challenge will come “very soon.”

“It should be something that gets publicly filed, so the whole United States will get to read this thing,” said Trusty, a former federal prosecutor. “And I think that’s very important to the president. He’s been very transparent through this whole process.”

“It’s coming very soon,” Trusty said, adding that the team will possibly file it on Aug. 22.

Trusty said that the team plans to request judicial intervention via a special master, an appointee by the court who will oversee an aspect of the case. A special master, on rare occasions, is needed in cases where a “privilege issue” is present, Trusty said, such as when a search warrant is executed at an attorney’s office. He added that this case warrants the assignment of a special master because it involves issues of attorney-client privilege and executive privilege.

“We have to get somebody in the middle because we are not going to leave it to DOJ to tell us that they are doing their filter search, and they are the guardians of what’s privileged or not,” Trusty said, adding that the special master can order to halt the DOJ’s document reading.

“We are going to have court involved, judicial intervention, at the district court level to get somebody in the mix here that can help us vindicate the Fourth Amendment rights of the president.”

Trusty suggested that the forthcoming legal filing will argue that the search warrant was too broad, breaching a requirement under the Fourth Amendment.

“The Fourth Amendment requires particularity. It requires narrowness to the intrusion on the person’s home,” he said, adding that the warrant has language in it that authorized the federal agents to take “whole boxes” and “any boxes near” perceived classified documents.

“That’s really the functional equivalent of a general search. There’s just no limit to that kind of scope in the warrant,” Trusty said.

Jeffrey Clark, former U.S. assistant attorney general for the Civil Division during the Trump administration, appeared to share this view.

Specifically, he pointed to a statement on “Attachment B” of the warrant: “[a]ny government and/or Presidential Records created between Jan. 20, 2017, and Jan. 20, 2021” shall be subjected to seizure if the agent deems it relevant as “evidence, contraband, or fruits of crime.”

This statement, Clark wrote, makes the warrant exactly the type of general warrant that the “Framers abhorred and sought to ban in the Fourth Amendment,” citing two historical cases—Wilkes v. Wood and Entick v. Carrington—that he says “inspired” the ban, under the Fourth Amendment, on warrants that are too general.

In addition, Clark wrote the warrant is “undermined by its timing” and, for this reason, has an underlying political motive.

“Since [federal] officers had been to Mar-a-Lago to inspect the documents there, they already knew there were [presidential] documents there, and have for [months],” Clark wrote. “The political nature of [the] raid [is] clear because they waited to search for what they knew was ALREADY THERE until just before the Midterms.”

“President Trump is absolutely right to assert his constitutionally protected rights and ask the Court to immediately stop document review, appoint a special master, and demand the Department of ‘Justice’ show cause for their unreasonable, irregular, and politically motivated raid,” Ellis said in a statement to The Epoch Times.

“Americans deserve to know how their own law enforcement is operating and by what rules,” she said. “If Attorney General [Merrick] Garland truly wants to even attempt to restore legitimacy in the FBI’s credibility, he has to answer for this.

“No one is above the law, but absolutely no one is below the law in America either, even if your last name is Trump,” Ellis said. “Everyone named Trump and associated with Trump has been targeted and harassed by law enforcement and the Democrats for six years. This has to stop.”