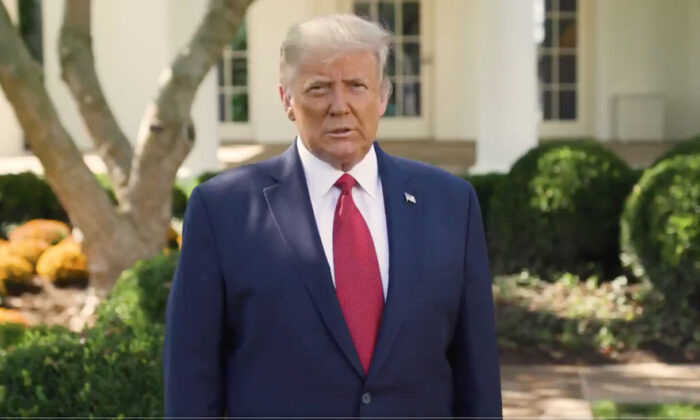 President Donald Trump speaks from the Rose Garden at the White House in Washington, Oct. 7, 2020, in this still image from video posted on Trump's Twitter page. (@realDonaldTrump)
Donald Trump

Trump to Hold Town Hall On Oct. 15 Instead of Virtual Debate With Biden: Campaign Adviser

Biden said on Thursday that he will participate in an ABC News town hall forum in Philadelphia on Oct. 15, the date originally slated for the second presidential debate.

Miller, in an appearance on Fox News on Friday, commented on Biden’s plans to appear on ABC while saying Trump’s town hall would be broadcast on “multiple networks.”

“[N]ext Thursday, we’ve already seen that Sleepy Joe is going to accept an invitation to join a different network, in the place of the town hall. He’s happy to do it with the ‘undecided voters’ that are essentially all Biden supporters,” Miller said. “We’re actually going to be on multiple networks at the same time. It hasn’t been announced yet. But I can give you that tease.”

The question of the second debate became a political hot potato after Trump said that he would not take part in a virtual debate, as originally proposed by the Commission on Presidential Debates (CPD) with the stated aim “to protect the health and safety of all involved.”

“No I’m not going to waste my time on a virtual debate,” Trump said during an interview Thursday morning on Fox.

Biden’s campaign requested for the debate to be postponed to Oct. 22.

“Joe Biden was prepared to accept the CPD’s proposal for a virtual Town Hall, but the President has refused, as Donald Trump clearly does not want to face questions from the voters about his failures on COVID and the economy,” the Biden campaign said in a statement. “As a result, Joe Biden will find an appropriate place to take questions from voters directly on October 15th, as he has done on several occasions in recent weeks.”

ABC News said Biden’s new event will be moderated by network anchor George Stephanopoulos who would take questions from voters.

Later Thursday night, after White House physician Sean Conley cleared Trump for a “safe return” to public engagements by Saturday, Oct. 10, the Trump campaign issued a statement calling on the CPD to allow the scheduled debate to go ahead as “agreed to months ago.”

Biden, meanwhile, said on Tuesday that the second debate should be canceled if Trump remains infected, noting that “too many people have been infected,” and that it’s a “very serious problem.”