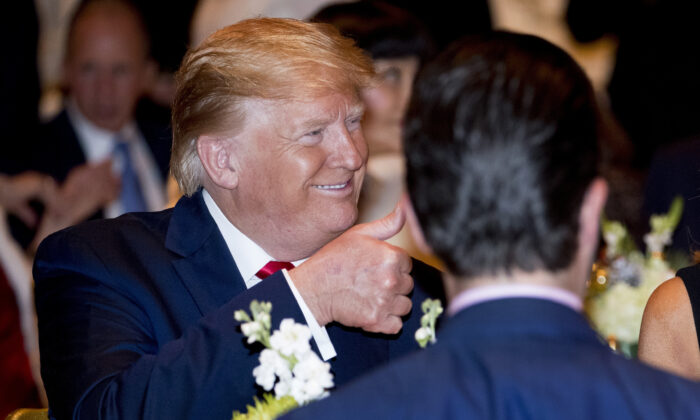 Republican President Donald Trump is going to hold a rally in Wisconsin on the same night that Democratic presidential contenders debate in Iowa.

The Trump campaign, officially known as Donald J. Trump for President, announced the Jan. 14, 2020, rally on Dec. 30. It will be held at the UW-Milwaukee Panther Arena in Milwaukee.

“President Trump looks forward to returning to the Badger State to celebrate his message of ‘Promises Made, Promises Kept.'”

The Democratic National Committee (DNC) announced earlier this month that it hold its first debate in Iowa of this cycle on Jan. 14, 2020. The debate, hosted by CNN and the Des Moines Register, will be held at Drake University in Des Moines.

The start time of the debate hasn’t been announced but it will likely be 7 p.m. CST or 8 p.m. CST, going from past debate start times. That means Trump will be on the stage in Wisconsin at the same time top Democrat contenders are debating in Iowa.

Five of the candidates have qualified so far for the Jan. 14 debate: Biden, Buttigieg, Klobuchar, Sanders, and Warren.

The DNC rejected Yang’s request that the DNC commission new polls ahead of the Jan. 10 qualifying deadline, arguing that there haven’t been enough surveys conducted in recent weeks.

A committee spokesperson said in a statement obtained by The Hill that it would not commission polls.

If cost is an issue we would be glad to contribute to the @DNC the cost of the commissioned polls. It’s a small price to pay to actually see what voters are thinking at this crucial time. #pollthepeople

“The DNC has been more than inclusive throughout this entire process with an expansive list of qualifying polls, including 26 polls for the December debate, more than half of which were state polls,” the spokesperson said.

Steyer said on Monday that he agreed with Yang, saying: “The race has changed since the last early state polls over 40 days ago.”

Yang said in a statement: “We need the @DNC to #PollThePeople. Between now and January 10, the DNC should commission four early state qualifying polls in Iowa, New Hampshire, Nevada, and South Carolina, where all the candidates have invested their time, resources, and staff.”

“It has been 47 days since a qualifying poll in Iowa, New Hampshire, or Nevada was taken. As you know, big shifts can happen within short periods in this race, as we’ve already witnessed multiple times. Let’s ask the people,” he added.