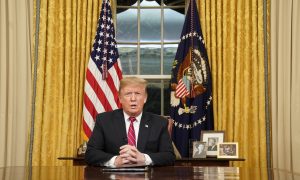 President on Border Situation: ‘A Crisis of the Heart and a Crisis of the Soul’
0
Share Now
TelegramFacebookTweetEmailTellMeWeReddit
Copy Link 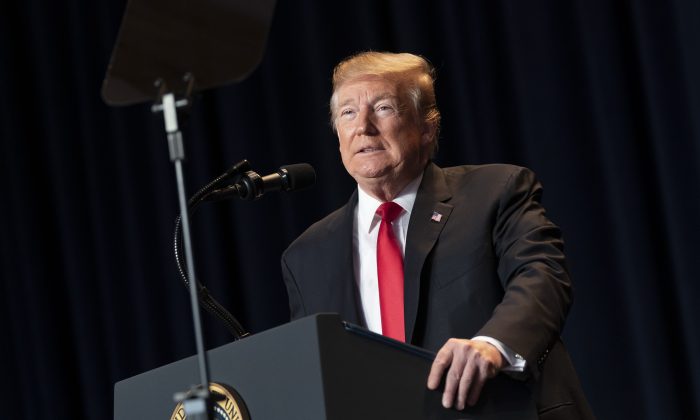 President Donald Trump will secure up to $8 billion in funds for wall construction after signing a spending bill and declaring a national emergency on the southwest border, Director of the Office of Management and Budget Mick Mulvaney said on Feb. 15.

Congress passed the spending bill on Feb. 14. The $333 billion package includes $1.375 billion for physical barriers on the southwest border. The amount is far less than the $5.7 billion Trump demanded from Congress last year based on requests from experts at the Department of Homeland Security. Mulvaney said the administration is prepared to transfer an additional $6.7 billion from the Defense and Treasury departments using the national emergency declaration.

When Trump temporarily reopened the government three weeks ago, he promised that he would use the executive powers at his disposal to secure funds for a border wall if Congress failed to do so by Feb. 15. The White House announced on Feb. 14 that the president intended to sign the spending bill and declare a national emergency on the southwest border.

“President Trump will sign the government funding bill, and as he has stated before, he will also take other executive action—including a national emergency—to ensure we stop the national security and humanitarian crisis at the border,” White House press secretary Sarah Sanders said. “The president is once again delivering on his promise to build the wall, protect the border, and secure our great country.”

Shortly after the announcement, the Senate passed the spending bill by a vote of 83-16. The House passed the measure on a partisan vote of 231-180.

The president’s intent to sign the bill ends the prospect of another shutdown but opens the door to legal challenges from Democrats. Sanders said that the White House was prepared for legal challenges to the executive order.

“We’re very prepared, but there shouldn’t be [legal challenges]. The president’s doing his job. Congress should do theirs,” Sanders said.

Since taking office, Trump has demanded that Congress fund construction of a wall on the southern border, his landmark campaign promise. Democrats, whose votes are needed to reach a 60-vote threshold in the Senate, have thwarted all attempts. Last year, the president followed through on a promise and refused to sign a spending bill that did not include funds for a border wall. As a result, Congress missed a deadline to fund the government, triggering a partial shutdown in December last year. The shutdown stretched on for 35 days, the longest on record.

On average, approximately 2,000 illegal aliens enter the United States on a daily basis, according to the White House. Many of those who enter have criminal histories or are gang members. Cartels are taking advantage of the porous border to smuggle vast amounts of drugs into the country, contributing to an already devastating opioid crisis. Meanwhile, some 10,000 children are trafficked across the border every year to be sold as sex slaves.

An earlier version of this article misstated Mick Mulvaney’s title. He is the director of the Office of Management and Budget. The Epoch Times regrets the error.