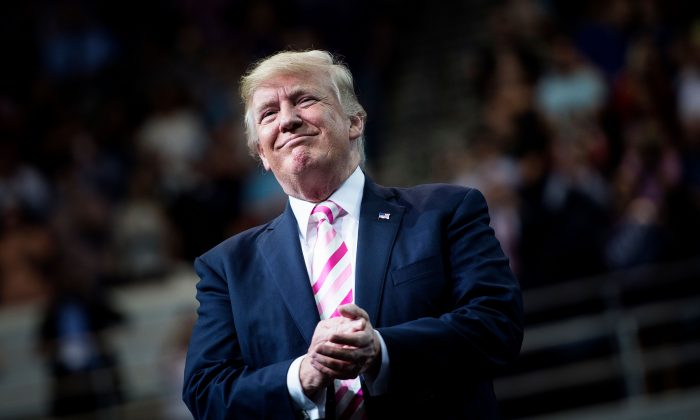 WASHINGTON—The American economy has come roaring back, and President Donald Trump is showing how he cares about the well being of all Americans—these will be the major takeaways from Trump’s first State of the Union address, according to a senior administration official.

Mandated by the Constitution, the annual address is typically a president’s most important speech of the year before his largest audience. It gives the president the opportunity to make his case for the direction he wishes to give the nation. While some addresses have more or less been laundry lists of new initiatives, presidents also often seek to use the address to articulate overarching themes.

This year, according to the senior administration official, Trump will speak about his administration’s efforts to build a “safe, strong, and proud America.”

The president is expected to speak from the heart, and make the case for national unity based on patriotism and the increased opportunities afforded by a growing economy.

Trump will concentrate on five topics: jobs and the economy, infrastructure, immigration, trade, and national security.

These topics have been the themes of his administration so far, and have been addressed in presidential remarks, legislation, and proposals.

In his speech at the World Economic Forum at Davos on Jan. 26, Trump may have given a preview of what he will say in the State of the Union: “The stock market is smashing one record after another, and has added more than $7 trillion in new wealth since my election.  Consumer confidence, business confidence, and manufacturing confidence are the highest they have been in many decades.

“Since my election, we’ve created 2.4 million jobs, and that number is going up very, very substantially.  Small-business optimism is at an all-time high.  New unemployment claims are near the lowest we’ve seen in almost half a century.  African American unemployment has reached the lowest rate ever recorded in the United States, and so has unemployment among Hispanic Americans.”

At a meeting with around 100 of the nation’s mayors on Jan. 24, Trump announced a price tag for his new infrastructure plan: $1.7 trillion. A draft version of the plan leaked on Jan. 22. The draft plan, which the White House has chosen not to comment on, will seek to use federal funds to leverage private and local investment in infrastructure projects, and will also make a priority of investment in rural areas.

The address will give Trump the opportunity to advance the ongoing debate about immigration. The White House released an immigration plan on Jan. 25 that called for a path to citizenship for an estimated 1.8 million illegal immigrants estimated to be eligible for DACA status—the legal status given to those brought into the United States as children in an executive order issued by President Obama. In return for this amnesty, Trump has asked for $25 billion for a wall and border security measures on the southern border, restrictions on chain migration, and an end to the diversity visa lottery.

Trump’s plan was immediately rejected by leading Democrats and also by immigration hawks in his own party.

In an address that the senior administration official says will have a bipartisan tone, Trump can make the case to rally lawmakers from both sides of the aisle to his compromise proposal on immigration.

Trump’s remarks on trade are expected to follow the outline he set forth in his remarks to APEC on Nov. 10, 2017, in which he called for “robust trade relationships rooted in the principles of fairness and reciprocity.” In those remarks, Trump criticized other nations’ unfair trade practices, announced the determination to not let the United States be taken advantage of anymore, and offered bilateral trade agreements to any nation that would “abide by the principles of fair and reciprocal trade.”

On national security, Trump is expected to speak to the need to rebuild the nation’s military. He will articulate a policy of seeking peace through strength and the need to have clarity about who are our friends and who are our adversaries. He will also address his administration’s efforts to defeat terrorism around the world.

State of the Union addresses have come to have a certain amount of theater associated with them. The president will seat exemplary individuals in the box seats overlooking the Congress and acknowledge them in the address, using their experiences to make the case for the president’s policies.

The Democrats will not leave the opportunity for theatrical gesture to Trump uncontested. Democratic lawmakers have said they will fill the gallery with DACA-eligible illegal aliens, in order to call attention to the immigration issue.

This year’s address comes at a time of stark political divisions. The Democrats recently shut down the government for a weekend by refusing to approve a continuing resolution for temporary funding.

The Democrats wanted to tie approval of the budget to amnesty for the “Dreamers”—all of the illegal aliens brought into the country as children. The swift cave in by Democratic leadership on the shutdown suggests that they will now separate negotiations about immigration from those about the budget.

Nonetheless, they have staked out a position on the budget at odds with the president. Trump wishes to increase military spending; the Democrats want parity for domestic spending, raising it along with defense spending. The two sides have until Feb. 8 to work out a deal.

The Democrats have chosen Congressman Joseph Kennedy III of Massachusetts, to deliver the party’s State of the Union response. The big stage will give Kennedy the chance to confirm his status as a rising Democratic star.

Throughout his presidency, Trump has called for patriotism and national unity. In his Inaugural Address he spoke of how “a new national pride will stir our souls, lift our sights, and heal our divisions.”

In his address to a joint session of Congress in February 2017, Trump spoke of “a renewal of the American spirit”: “We are one people, with one destiny. We all bleed the same blood. We all salute the same great American flag. And we all are made by the same God.”

In the State of the Union, Trump will likely link the success of his economic policies to his efforts to improve the lots of all Americans. A national government that improves conditions for everyone can be the basis for a new national unity. If Trump succeeds in reaching his national audience with this message, some of the difficult partisan divisions he faces may prove more manageable.

Trump will deliver the address at 9 p.m. on Tuesday, Jan. 30 before a joint session of Congress. It will be televised on the major networks.