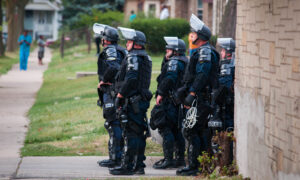 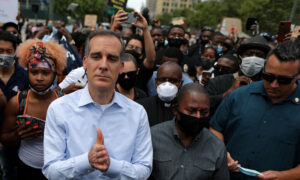 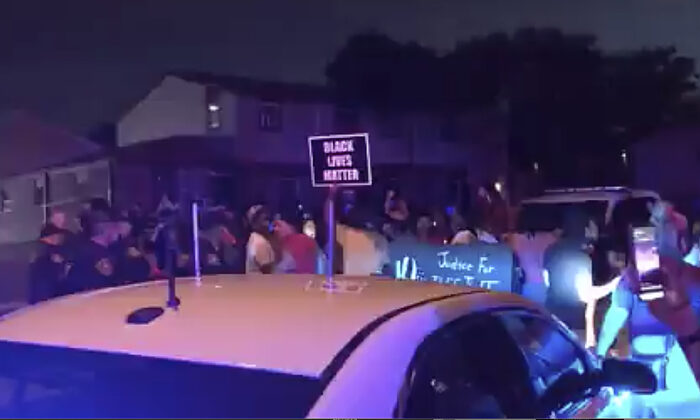 Protesters gather near the site of a police shooting in Kenosha, Wis., on Aug. 23, 2020. Rioting took place in the city overnight. (WDJT-TV via AP)
Trump Administration

Trump to Be Briefed on Police Shooting of Wisconsin Man

President Donald Trump will be briefed on Monday on the police shooting of a black man in Wisconsin.

“I am certain he will be briefed on the full matter as he is on each and every matter,” White House chief of staff Mark Meadows told reporters outside the White House.

Riots erupted in Kenosha, between Chicago and Milwaukee, after officers shot the man, identified as Jacob Blake.

Blake was rushed to the hospital in serious condition. He is alive.

Meadows said he was briefed on the matter earlier Monday and asked Attorney General William Barr, who was already scheduled to go to the White House, to brief the president and others on the shooting because they want “a full understanding of what happened.”

“It’s too early to tell in terms of what actually happened from what I was briefed on,” Meadows said.

“Obviously the video tells a story that is troubling and yet, at the same time, we’ll get a full briefing within the next couple of hours.”

Kenosha officials said officers were responding to a domestic violence call when they encountered Blake. It wasn’t clear whether he was a suspect or just in the area. Court records show Blake was charged last month with two misdemeanors and third-degree sexual assault, a felony.

Video footage appeared to show the officers shooting Blake as he tried to enter a vehicle.

Officers “provided immediate aid” to the man, who was transported via flight to Froedtert Hospital in Milwaukee.

Wisconsin officers and Kenosha Sheriff’s Department deputies were called to the scene to take over from Kenosha officers. The state Department of Justice is probing the matter.

Gov. Tony Evers, a Democrat, said Blake “was shot in the back multiple times in broad daylight.”

“Kathy and I join his family, friends, and neighbors in hoping earnestly that he will not succumb to his injuries,” he said in a statement, calling for action from elected officials across the state on racism and alleged excessive use of force by the police.

Joe Biden, the Democratic presidential nominee, said in a statement that “the nation wakes up yet again with grief and outrage that yet another Black American is a victim of excessive force.”

“This calls for an immediate, full and transparent investigation and the officers must be held accountable,” he said.