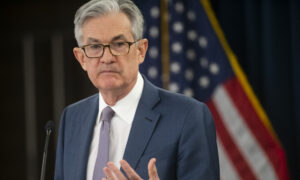 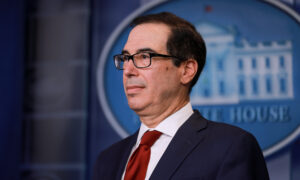 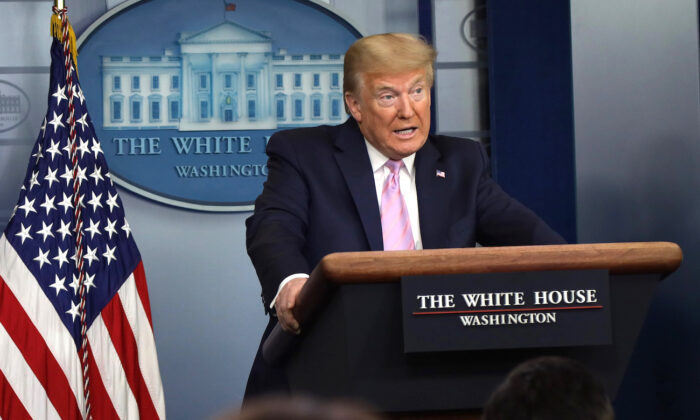 President Donald Trump speaks during the daily briefing of the White House Coronavirus Task Force in the James Brady Briefing Room at the White House in Washington on April 10, 2020. (Alex Wong/Getty Images)
AMERICA

Trump to Announce ‘Opening Our Country’ Taskforce, Reflects on ‘Biggest Decision’ of His Life

President Donald Trump on Friday said he will soon announce a new task force dedicated to opening up the United States for business, as he describes the decision as to how to reopen the country “the biggest decision” he would ever make.

Trump said he calls it the “Opening Our Country” task force or council so as not to confuse the group with the White House Coronavirus Task Force, which is chaired by Vice President Mike Pence.

“We’re going to have great business leaders, doctors, and a great group of people,” Trump told reporters at a press conference on Friday at the White House on the CCP (Chinese Communist Party) virus, also known as the novel coronavirus.

A voice in the briefing room said in passing that it is like an “economic task force,” to which Trump clarified, “This is beyond economic.”

He said he would probably announce the task force on Tuesday. The group is likely to meet via teleconference.

“Then I will have to make a decision,” Trump said. “[Such as] do we close a little area that’s a hot spot? … Also, very important, different parts of the country because you go to the Midwest, it is different than perhaps the East Coast or the West Coast. The West Coast, those numbers are amazing on the West Coast. Very interesting.”

“I do say this, I want to get [the United States] open as soon as possible,” Trump told reporters. “This country was meant to be open and vibrant and great. Not with people staying in … I would love to open it. I’m not determined to do anything, but the facts will determine what I do.”

When asked whether he would be open to shutting down the country again should there be a spike in infections, Trump said that he would consider the idea depending on the outbreak.

“I’m watching other countries—in many cases, they’re ahead of us [such that] it attacked them before us, it hit them first … and what they’re doing and the successes they’re having, and that’s going to play a large part,” Trump said. He later noted that should there be any “flare-ups,” after the country reopens for business, then he hoped they would be localized “so we can control it from a local standpoint without having to close.”

“We are fighting this hidden enemy, which is genius. It is genius. It is genius. The way it has attacked so many countries at so many different angles … it is a very tough adversary, but we are going to win, and we will win very decisively,” the president said. “I will have to make a decision, and I only hope to God it is the right decision. But I would say without question: it is the biggest decision I have ever had to make.”

‘A Different Kind of Death’

One reporter asked: “The models, as I understand them, are based on social distancing continuing through May. Is that correct? And if you were to open the economy on May 1 or sometime during that month, would that impact the models in terms of the deaths that you’d expect?”

White House Coronavirus Response Coordinator Debbie Birx agreed that the projections by the Institute for Health Metrics and Evaluation at the University of Washington in Seattle (IHME) are on social distancing continuing through May. However, she noted that the IHME model has been shifting continuously and that the curves “are getting much broader confidence intervals … when you see that, you know the model has a bit of instability.”

As such, it is hard to predict what will happen, she said. “Look at how much the model has changed in just a week. Remember, just a week ago, it was 80,000. Now it’s 60,000,” Birx pointed out, referring to how the projected deaths by August in the United States have dropped again in the past week as per the model.

Birx also pointed out that different states have approached the pandemic differently, with some states imposing stay-at-home orders. In contrast, other states have not done so, and have instead been conducting more widespread testing and contact tracing. The latter approach would help inform authorities of individuals who are more likely to have the CCP virus and, therefore, should be quarantined.

“We look at what New York is doing, and Detroit, and we forget that there’s a Utah and New Mexico and North and South Dakota and a whole series of states that have been doing testing and contact tracing, and have been testing at rates higher than that per capita rate that we all have discussed,” Birx explained. “So we’re looking at that: What did they do? Where are the most vulnerabilities? Where are the outbreaks most likely to occur?”

Trump told the reporter: “You are right about opening up and [the possibility that] it could lead to death, but staying at home leads to death also. It is very traumatic for this country, but staying at home, if you look at numbers, that leads to a different kind of death, perhaps, but it leads to death also. It is a very big decision. It is the biggest decision I will ever make.”

The United States has recorded more than 18,700 deaths attributed to the CCP virus.

Data released April 3 by the Bureau of Labor Statistics (BLS) shows that the American economy has lost more than 700,000 jobs in the first weeks of government efforts to slow the spread of the CCP virus. The BLS data doesn’t capture the full effects of the CCP virus since it took hold of the United States, as it’s based on a survey conducted between March 8 and March 14, before many of the mitigation measures in the country were adopted.

The Economic Policy Institute, a Washington-based think tank, on April 1 made a dire forecast that 19.8 million jobs could be lost by July.