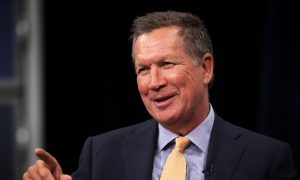 The View From Ohio: Kasich's Win and What's Next
0 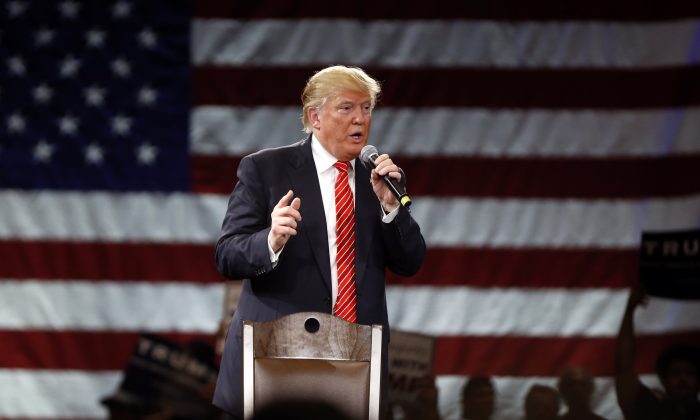 Trump: Time to Rally Around Me or Expect Voter Riots

WASHINGTON—After yet another round of convincing victories for Donald Trump, Republican leaders spent Wednesday wavering between grudging acceptance and deep denial about the businessman’s likely ascent to the GOP presidential nomination. An emboldened Trump warned that if the party tried to block him, “You’d have riots.”

With at least three more states in his win column, Trump is now the only candidate with a path to clinching the Republican nomination before the party’s convention in July. But he still must do better in upcoming contests to get the necessary 1,237 delegates, leaving some opponents with a sliver of hope he can still be stopped.

“I still think it’s a very realistic chance that nobody’s going to have a majority of the delegates,” said Henry Barbour, a senior Republican National Committee member who worked on Marco Rubio’s delegate strategy until the Florida senator exited the race Tuesday.

Barbour said Trump “doesn’t deserve to be president,” but also said he could ultimately support the billionaire if he “can convince me that he’s presidential material.”

Trump cautioned that his supporters would revolt if he falls just short in the delegate count.

Trump cautioned that his supporters would revolt if he falls just short in the delegate count and loses in a rules fight.

“If you just disenfranchise these people, I think you would have problems like you’ve never seen before,” Trump said on CNN’s “New Day.”

Despite the deep concerns about Trump within the Republican Party, there was little tangible action Wednesday that indicated a way to stop the real estate mogul’s march toward the general election.

There was no rush among party leaders or donors to coalesce around Ted Cruz, the only candidate in the race with even a long-shot chance of overtaking Trump in the delegate count. A small group of conservatives moved forward with plans to meet Thursday to discuss the prospect of rallying behind a third-party option, but no candidate had been identified to lead that effort.

The three best-financed efforts to stop Trump abruptly ceased advertising after Tuesday’s elections. The outside groups American Future Fund, Our Principles and Club for Growth have no Trump attack ads planned for Arizona – a crucial winner-take-all contest in six days – or in any states beyond.

Former House Speaker John Boehner floated his successor, Paul Ryan, as the nominee in the event of a convention fight. But Ryan quickly took himself out of the mix, saying through a spokeswoman that he would “not accept a nomination and believes our nominee should be someone who ran this year.”

Meanwhile, Democratic front-runner Hillary Clinton set her sights on a November showdown with Trump. Her sweep of Tuesday’s five primary contests — including a slim lead in yet-to-be-called Missouri — was a harsh blow to rival Bernie Sanders, giving Clinton what her campaign manager described as an “insurmountable lead” in the delegate count.

“We are confident that for the first time in our nation’s history, the Democratic Party will nominate a woman as their presidential nominee,” Robby Mook wrote in a memo to supporters.

Trump urged Republicans to view the party’s nominating contest with the same sense of clarity. During a round of calls to morning television shows, he said some of the same Republican senators who publicly criticize him have called him privately to say they want to “become involved” in his campaign eventually. He also picked up an endorsement Wednesday from Florida Gov. Rick Scott.

Trump has won 47 percent of the Republican delegates awarded so far, according to the Associated Press delegate count. He needs to win 54 percent of the remaining delegates to clinch the nomination by the time the primary season ends on June 7.

Trump Tops Rubio in Florida, Falls to Kasich in Ohio

Just a handful of states will vote between now and mid-April, a reprieve for opponents.

“We’ve got four weeks to identify what the most effective path is,” said Tim Miller, a former Jeb Bush aide who now works for an anti-Trump super PAC.

Former Senate Majority Leader Trent Lott, who is supporting Kasich, said there were “calls going back and forth between the Kasich-Rubio campaign” about the possibility of a joint ticket, though he said those conversations were preliminary.

Any scenarios that end with blocking Trump could leave the party in chaos. But some Republicans suggested that given the party’s current state, the chaos couldn’t get much worse.

“The divisions are already there,” said John Jordan, a California-based donor who was leading a pro-Rubio super PAC. “There’s already open warfare on TV. A couple thousand people in a food fight in Cleveland pales in comparison.”