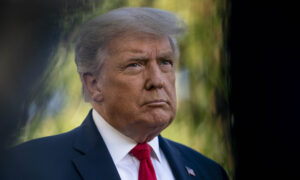 President Donald Trump warned that he will deploy the military to the southern U.S. border if Mexico doesn’t stop the flow of migrants from Central America, most of whom end up entering the United States illegally.

“I must, in the strongest of terms, ask Mexico to stop this onslaught—and if unable to do so I will call up the U.S. Military and CLOSE OUR SOUTHERN BORDER!” he said in an Oct. 18 tweet.

He also warned Honduras, Guatemala, and El Salvador, where most of the migrants originate, that the United States will cut off aid to those nations as their “leaders are doing little to stop this large flow of people, INCLUDING MANY CRIMINALS.”

In 2017, the United States sent about $530 million in aid to the three countries.

Trump said he considers the increasing flow of migrants an “assault on our country” led by the Democratic Party, which has blocked Republican proposals to overhaul and tighten the immigration system and improve border security, including building a wall along the southern border.

“The assault on our country at our Southern Border, including the Criminal elements and DRUGS pouring in, is far more important to me, as President, than Trade or the USMCA,” he said in another tweet. “Hopefully Mexico will stop this onslaught at their Northern Border. All Democrats fault for weak laws!”

In an Oct. 16 tweet, Trump said he “strongly informed” Honduran President Juan Orlando Hernández that he’d halt aid if a large caravan heading from the small country toward the United States isn’t stopped and returned.

As many as 3,000 people crossed into Guatemala from Honduras after a standoff with police in riot gear on Oct. 15, according to the organizers—activists from the leftist Liberty and Refoundation (Libre) party, which controls almost a quarter of the Honduran legislature and advocates socialism.

Trump retweeted a video on Oct. 18 that shows the migrants getting paid what appears to be 50 Guatemalan quetzals each (around $6.50). The video appears to have been taken in Chiquimula, Guatemala, on Oct. 16. It isn’t clear where the money is coming from or who the men are that are handing out the payments.

Facebook user Enrique Vitanza posted the video on his page on Oct. 16. When asked about the origin of the video, Vitanza said it was sent to him from Guatemala. He offered several theories about who was handing out the money, but The Epoch Times couldn’t independently verify them.

Can you believe this, and what Democrats are allowing to be done to our Country? pic.twitter.com/4aDpASkjIU

The Honduran Foreign Ministry called on its citizens not to join the caravan. The government “urges the Hondurans taking part in this irregular mobilization not to be used by a movement that is clearly political,” it said.

One of the four caravan organizers, former Libre lawmaker Bartolo Fuentes, was detained by Guatemalan police after crossing the border. The Honduran security ministry said Fuentes had been detained because he “didn’t comply with Guatemalan immigration rules” and would be deported back to Honduras.

Some migrants have since turned around and headed home, but many are continuing the trek.

The Mexican ambassador to Guatemala met with the migrants on Oct. 17 and warned them of the dangers of “irregular entry” into Mexico, especially human traffickers. The trafficking networks are controlled by drug cartels and use drug-smuggling routes to help the migrants cross the U.S. border illegally. Previous reports by media and human-rights organizations say that up to 80 percent of the women are raped by gang members, traffickers, or other migrants before reaching the U.S. border.

The ambassador told the migrants that Mexico has a process for applying for refugee status. While those who reach the United States commonly apply for asylum, most aren’t eligible because they aren’t fleeing state persecution, but instead escaping abysmal conditions in their countries.

Guatemalan President Jimmy Morales said on Oct. 17 his government dismissed threats of constraints on U.S. foreign aid. He said he’s spoken with Hernandez about ensuring that migrants who wish to return home can do so safely.

Honduras has faced an escalation of violence since its government was destabilized by a military coup in 2009. Then-President Manuel Zelaya was turning the country in a leftist direction and eventually was accused of attempting to illegally prompt a rewriting of the constitution. But, instead of a legal removal from office, he was detained by the military and forced into exile.

The coup gave rise to a leftist movement, the National Popular Resistance Front (a predecessor of Libre), which organized large marches and civil disobedience. The interim regime then suppressed the crowds with force, sometimes deadly.

The United States, led at the time by President Barack Obama, condemned the coup. But Secretary of State Hillary Clinton’s emails, which were released years later, showed her department worked to block efforts of other Central American countries to restore Zelaya to the remainder of his term. Instead, she negotiated with the coup regime regarding elections scheduled later that year.

Clinton said she didn’t want to call the regime illegitimate as it would force her to pause aid to Honduras. But Zelaya reacted to her move by calling for a boycott of the election, and the Honduran government descended into a legitimacy crisis.

Update: The article was updated with information about President Trump tweeting a video of the caravan migrants receiving money.