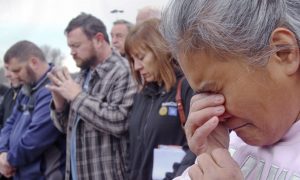 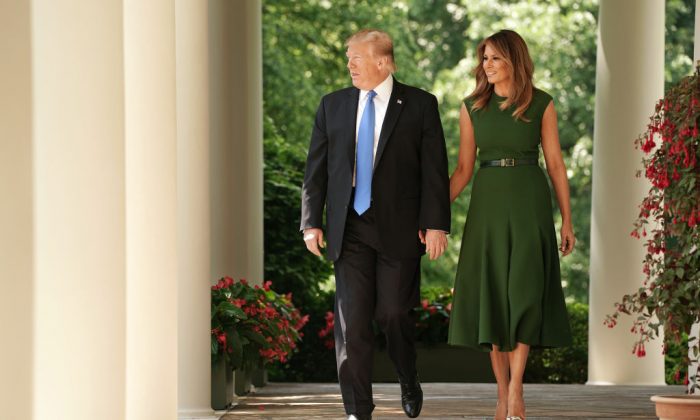 President Donald Trump (L) and First Lady Melania Trump walk out of the Oval Office during a National Day of Prayer service in the Rose Garden at the White House on May 2, 2019. (Chip Somodevilla/Getty Images)
Trump Administration

Trump: ‘The Power of Prayer. It’s the Most Powerful Thing There Is’

Speaking to about 100 religious leaders and Trump administration officials, President Donald Trump said prayer is the “most powerful thing there is” in which many Americans still believe.

“America will be a nation that believes forever, and we certainly believe, more than anyone, the power of prayer—it’s the most powerful thing there is,” Trump said at a White House dinner on May 1, the eve of the National Day of Prayer.

In attendance at the dinner were representatives from various faiths—Christians, Muslims, Jews, Sikhs, and Hindus. There, Trump stressed the importance of protecting religious freedoms.

“Tonight we break bread together united by our love of God, and we renew our resolve to protect the sacred freedom of religion—all of us,” he said, according to Life Site News.

In a proclamation on National Day of Prayer 2019, the president stated that “The United States’ steadfast commitment to upholding religious freedom has ensured that people of different faiths can pray together and live in peace as fellow American citizens. We have no tolerance for those who disrupt this peace, and we condemn all hate and violence, particularly in our places of worship.”

Trump also condemned the recent anti-religious hate crimes that occurred in America and abroad, including the recent shooting at Chabad of Poway synagogue in San Diego.

“All of us in this room send our love and prayers to the Jewish Americans wounded at the Chabad of Poway shooting in California. And our hearts break for the life of Laurie Gilbert-Kaye who was so wickedly taken from us,” Trump said at the dinner, according to CBN.

“We mourn for the Christians murdered in Sri Lanka on Easter Sunday and grieve for the Muslims murdered at their mosques in New Zealand,” he added. “Here at home, we also remember the three historically black churches burned recently in Louisiana and the horrific shooting last year at the Tree of Life Synagogue in Pittsburgh.”

Trump then reiterated the importance of prayer in his speech at the National Day of Prayer Service on May 2.

He began his speech by sending a prayer to the people of Venezuela. The socialist South American country has spiraled into humanitarian, economic, and political chaos after illegitimate dictator Nicolás Maduro refused to step down despite mounting international pressure.

In mid-January, Venezuela’s duly elected National Assembly declared Maduro’s presidency illegitimate due to a fraudulent election, and swore in Juan Guaidó as interim president. But Maduro has refused to give up control.

“I’d like to begin by sending our prayers to the people of Venezuela in their righteous struggle for freedom. The brutal repression of the Venezuelan people must end and it must end soon. People are starving. They have no food. They have no water. And this was once one of the wealthiest countries in the world. So we wish them well.  We’ll be there to help, and we are there to help,” Trump said.

Later in his speech, Trump said he will be doing everything he can to “make it better than ever before” for the American people—and especially for people of faith.

On this day of prayer, we once again place our hopes in the hands of our Creator. We give thanks for this wondrous land of liberty, & we pray that THIS nation – OUR home – these United States – will forever be strengthened by the Goodness and the Grace & the eternal GLORY OF GOD! pic.twitter.com/RtSI3j1GWH

“We’re doing things that will make it better than ever before, and especially for churches and synagogues and mosques and everyone else—people of faith. We pray that this nation—our home, these United States—will forever be strengthened by the goodness and the grace and the eternal glory of God,” he added.

During his May 2 speech, Trump also announced his new rule that would protect health care groups and individuals from mandatory provision or participation in services they object to for religious or moral reasons.

“And just today, we finalized new protections of conscience rights for physicians, pharmacists, nurses, teachers, students, and faith-based charities. They’ve been wanting to do that for a long time,” he said. “Together, we are building a culture that cherishes the dignity and worth of human life.  Every child, born and unborn, is a sacred gift from God.”

According to the Department of Health and Human Services, the rule promises to “promote and protect the fundamental and unalienable rights of conscience and religious liberty.” It specifically protects providers, individuals, and other health care entities “from having to provide, participate in, pay for, provide coverage of, or refer for, services such as abortion, sterilization, or assisted suicide,” according to the statement.