Trump: The New York Times, The Washington Post Should Be Stripped of Pulitzers for ‘Collusion’ Reporting 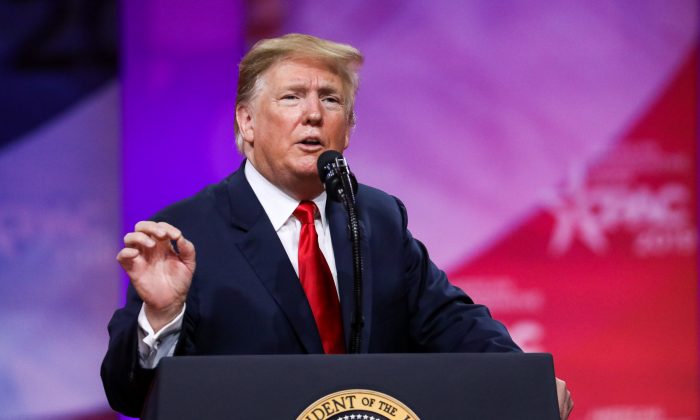 President Donald Trump said the staff of The New York Times and The Washington Post should have their 2018 Pulitzer Prizes rescinded in light of the result of the Mueller probe, which cleared the president of the allegation that his campaign colluded with Russian interference in the 2016 presidential election.

“So funny that The New York Times & The Washington Post got a Pulitzer Prize for their coverage (100% NEGATIVE and FAKE!) of Collusion with Russia – And there was No Collusion!” Trump said in a March 29 tweet. “So, they were either duped or corrupt? In any event, their prizes should be taken away by the Committee!”

So funny that The New York Times & The Washington Post got a Pulitzer Prize for their coverage (100% NEGATIVE and FAKE!) of Collusion with Russia – And there was No Collusion! So, they were either duped or corrupt? In any event, their prizes should be taken away by the Committee!

A number of staffers at the legacy newspapers were awarded the journalism prize in the National Reporting category “for deeply sourced, relentlessly reported coverage in the public interest that dramatically furthered the nation’s understanding of Russian interference in the 2016 presidential election and its connections to the Trump campaign, the President-elect’s transition team and his eventual administration,” the Pulitzer Prizes website states.

Yet, special counsel Robert Mueller, who took over a previous FBI counterintelligence probe in 2017 to investigate the interference and collusion allegations, recently finished his final report, stating that “the investigation did not establish that members of the Trump Campaign conspired or coordinated with the Russian government in its election interference activities,” according to a summary of his findings released by Attorney General William Barr on March 24.

Mueller and his team were praised by legacy press as trustworthy professionals who would leave no stone unturned in their pursuit of the truth. The team of nearly five dozen lawyers and FBI agents issued 2,800 subpoenas, executed nearly 500 search warrants, interviewed some 500 witnesses, obtained more than 230 orders for communications records, and made 13 requests for evidence to foreign governments.

Both The New York Times and The Washington Post appeared reluctant to fully embrace the collusion narrative before the 2016 election, perhaps because it seemed mainly based on the infamous Steele dossier, a series of unsubstantiated claims accusing the Trump campaign of conspiring with the Russians. The dossier was compiled by former British spy Christopher Steele, who was hired for the job, through intermediaries, by the Democratic National Committee and former Secretary of State Hillary Clinton, Trump’s opponent in the election.

While a few reporters at outlets such as Yahoo! and Mother Jones ran with the dossier claims and pushed the Russia collusion narrative before the election, The New York Times virtually snuffed out the issue about a week before Election Day with the Oct. 31, 2016, headline “Investigating Donald Trump, F.B.I. Sees No Clear Link to Russia.”

That changed, however, after the election. Both papers used a relentless stream of leaks from sources they didn’t identify to print a deluge of articles that followed the narrative that collusion happened after all.

Of the 20 articles between February and December 2017 picked for the Pulitzer, only one focused directly on Russian interference, while most others focused on the supposed collusion.

In response to Trump’s tweet, Pulitzer Prize Administrator Dana Canedy commented in an emailed statement: “This criticism is fake marketing. We stand behind the Pulitzer selection process, which has endured for 103 years. And the winning work speaks for itself. Beyond that, this simply doesn’t deserve comment.”

The New York Times responded in a March 29 tweet: “We’re proud of our Pulitzer-prize winning reporting on Russian meddling in the 2016 U.S. election. Every @nytimes article cited has proven accurate.”

We’re proud of our Pulitzer-prize winning reporting on Russian meddling in the 2016 U.S. election. Every @nytimes article cited has proven accurate. https://t.co/NvG27oeuNv