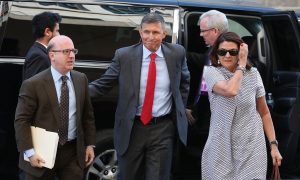 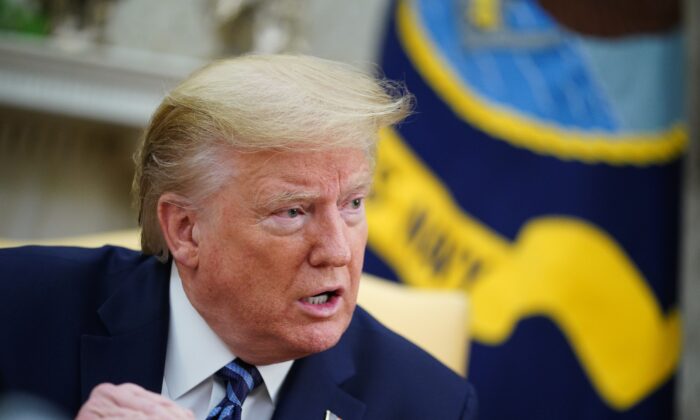 President Donald Trump speaks as he meets with New Jersey Governor Phil Murphy in the Oval Office of the White House in Washington on April 30, 2020. (Mandel Ngan/AFP via Getty Images)
Politics

“What they did to General Flynn—and by the way, to Roger Stone, and others—was a disaster, and a disgrace, and it should never be allowed to happen in this country again,” Trump told reporters in the White House.

“They tormented him. They destroyed him. But he’s going to come back bigger and better.”

Flynn was Trump’s national security adviser as the then-president elect prepared to take office in early 2017. Two FBI agents met with Flynn and he eventually pleaded guilty to one count of lying to the FBI.

The FBI was going to close the case against Flynn before agent Peter Strzok intervened, citing leadership of the agency, according to messages released on Thursday. Documents released Wednesday showed an FBI official mulling what the bureau’s goal was in speaking to Flynn.

“CNN tormented him,” he added to Jim Acosta of CNN.

“I really hope to see that CNN will, not even apologize, which they should, but just cover it fairly, because he’s in the process of being exonerated.”

CNN didn’t immediately respond to a request for comment.

Flynn was ousted from his position in February 2017.

Asked if he thought it was a mistake to fire Flynn, Trump said he wished he had all the information that’s now coming out.

“You see the written statements, where they were trying to force him into a position, where we can get him in a lie, can we get him this way, or that way. This is terrible. This is like what happened in—and I’m not going to name the countries, because we deal with these countries—but what would happen in other countries, not the USA,” he said.