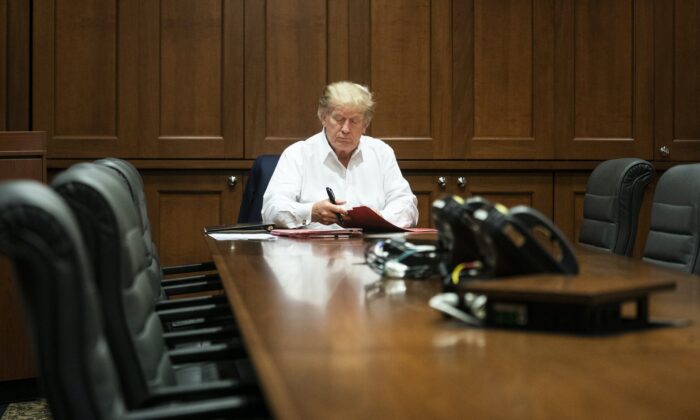 Trump Thanks Supporters Outside Walter Reed Hospital: ‘They Really Love Our Country’

President Donald Trump on Sunday wrote that he appreciates the fans and supporters outside Walter Reed hospital, where he is being treated for COVID-19.

“I really appreciate all of the fans and supporters outside of the hospital,” he said in a Twitter post at around 4 p.m. ET. “The fact is, they really love our Country and are seeing how we are MAKING IT GREATER THAN EVER BEFORE!”

The comment was the latest social media post from the president. A number of supporters and counter-protesters gathered outside the hospital over the weekend, while rallies were held across the United States for Trump.

Conley noted that Trump’s condition is being closely monitored, adding that doctors noted two “transient drops in his oxygen” levels. He said that on Friday, Trump had a high fever and saw a drop in his oxygen levels before seeing a marked improvement.

“We initiated dexamethasone and he received his first dose yesterday,” Dr. Brian Garibaldi said in the news conference. “Our plan is to continue that for the time being. Today he has been up and around and our plan is to have him eat and drink and be up out of bed as much as possible, and if he continues to look and feel as well as he does today, our hope is that we plan for discharge as early as tomorrow to the White House where he can continue his treatment course.”

During the briefing, Trump’s doctors appeared upbeat and projected a positive message about the president’s condition. He is currently not on supplemental oxygen and is able to walk around.

Conley said that during one of the two instances of a drop in oxygen on Friday, the president received supplemental oxygen.

“I didn’t want to give any information that might steer the course of illness in another direction and in doing so it came off that we were trying to hide something, which wasn’t necessarily true,” Conley said Sunday.

Conley, in news conferences over the past several days, said that Trump is on several medications, including dexamethasone, Remdesivir, and Regeneron.

It’s not clear when Trump contracted the virus.

A spokesperson for Pence told The Associated Press that the vice president and second lady, Karen Pence, tested negative for the virus on Sunday.

Democratic nominee Joe Biden and his wife, Jill Biden, have tested negative for the virus.