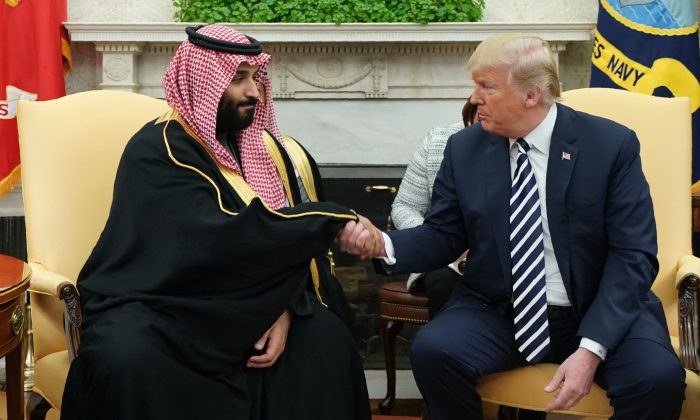 Trump Thanks Saudis for Lower Oil Prices, Says Good for US and World

President Donald Trump has thanked the Kingdom of Saudi Arabia for helping to lower oil prices, but, in the same breath, expressed a desire for a further decrease.

Trump appears to have used a high mark from Brent and a low mark from WTI, which seems to fit a pattern of exaggeration in his statements that tend to grab the attention of journalists eager to dissect his statements and point out the inaccuracy.

In a statement published Nov. 20, Trump said the Saudis have worked closely with the United States in keeping oil prices at reasonable levels, which brings multiple economic and security benefits.

He also spelled out the main reasons that his administration stands by the Saudis, contrasting the kingdom’s role in the region to that of Iran, which Trump said is responsible for the unrest in Yemen, efforts to destabilize “Iraq’s fragile attempt at democracy,” supporting the Hezbollah terrorist group in Lebanon, and Syrian President Bashar al-Assad.

“On the other hand, Saudi Arabia would gladly withdraw from Yemen if the Iranians would agree,” Trump wrote, adding that the Saudis would be willing to also provide humanitarian assistance, and fund efforts to fight radical Islamic terrorism.

Besides invigorating the economy in the United States—a net importer of oil—low oil prices would further weaken Iran.

Trump’s pressure campaign appears to be starving Iran of the U.S. currency, effectively driving the Iranian rial into the ground. Meanwhile, the regime appears unwilling to inject its dollar reserves into the market, which might alleviate the crippling effect on the economy, but would reduce the regime’s capital for sponsoring terrorists and militias such as Hezbollah in Lebanon and the Houthis in Yemen.

The Saudi-led Organization of the Petroleum Exporting Countries (OPEC) and its partners, such as Russia, are expected to consider cutting oil production by 1 million to 1.4 million barrels per day at its Dec. 6 meeting in Vienna.

Yet “traders speculated that a statement of support from President Trump might cause the Saudis to go easy on an oil production cut at the next meeting,” Phil Flynn, senior analyst with the Price Futures Group, said in a Nov. 21 report.

Presenting the Saudis in a good light helps Trump stave off critics of his handling of the murder of a Saudi journalist in October allegedly perpetrated by Saudi operatives.

The Trump administration sanctioned 17 senior Saudi officials while Riyadh called for the death penalty for five suspects in the killing. But some critics want Trump to move against Crown Prince Mohammad bin Salman, who, Trump said, may or may not have known about the murder. The young prince has worked to relax some economic and social restrictions in the country while taking a hard line against terrorism and the Muslim Brotherhood. The White House has considered putting the organization on its foreign terror watch list for ties to terrorism.

The Saudis had marked the journalist, Jamal Khashoggi, as a member of the Muslim Brotherhood, Trump said, though he stressed the killing was “an unacceptable and horrible crime” nonetheless.

While he called for a further decrease, even for Trump, oil prices need a bottom, unless he’s willing to choke the growth of U.S. oil drillers.

“If the oil price falls much further, you can forget about increasing shale oil output in the future,” Flynn warned in his Nov. 2 report. “Most shale oil producers were having a hard time making money when prices were above 70, if prices fall into the 50s, the rig counts will start to drop, and we will again see a drop in U.S. shale oil production forecasts.”

Indeed, as WTI crude dropped below $60 in the week to Nov. 21, U.S. energy companies cut three oil rigs, bringing the total count down to 885. The count had previously grown uninterrupted for three weeks and is up from 747 rigs a year ago.

The drop, however, didn’t come from the Permian Basin, the biggest U.S. shale oil formation, which hosts more than half of the country’s oil rigs. Active units there held steady this week at 493, the most since January 2015.