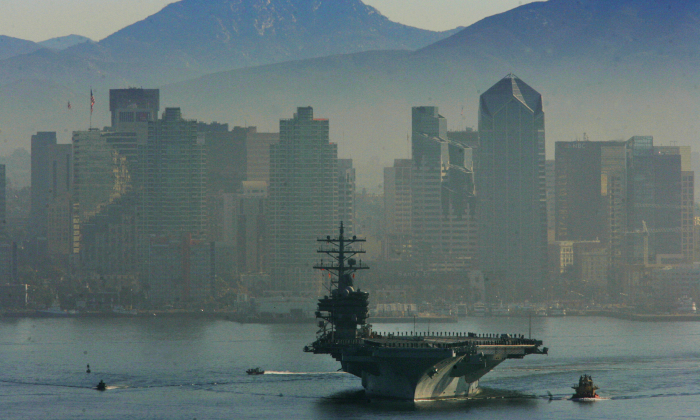 The USS Ronald Reagan heads out to sea with the San Diego skyline in the background January 4, 2006 at Naval Air Station Coronado, California. The Reagan is making its first deployment since being commissioned in 2003 in support of the U.S. war on terrorism. (Photo by Sandy Huffaker/Getty Images)
Trump Administration

“Thank you San Diego County for defending the rule of law and supporting our lawsuit against California’s illegal and unconstitutional ‘Sanctuary’ policies,” Trump wrote on Twitter. “California’s dangerous policies release violent criminals back into our communities, putting all Americans at risk.”

Thank you San Diego County for defending the rule of law and supporting our lawsuit against California's illegal and unconstitutional 'Sanctuary' policies. California's dangerous policies release violent criminals back into our communities, putting all Americans at risk.

San Diego County joined a string of local governments on Tuesday by voting to join the lawsuit filed by the Department of Justice against the state of California, Fox News reported.

The county plans to file an amicus brief supporting the federal lawsuit as soon as possible, according to County Board Chairwoman Kristin Gaspar, KCAL reported.

Gaspar said that after the sanctuary law passed, San Diego County allowed 284 criminal suspects to be released instead of handing them over to immigration agents.

“San Diego was really a model of excellence before, We were safer before SB54,” Gaspar told KCAL, referring to the sanctuary law’s reference number.

San Diego is the second largest county in California with some 3 million residents. It is the largest locale to join Trump’s legal battle. The county board voted 3-1, with one person absent.

The day before the San Diego vote, the city of Alamitos voted to approve an ordinance seeking to exempt the city from the state’s sanctuary laws because they are unconstitutional.

Prior to that, Orange County, the state’s third most populous, rejected a state law that shielded illegal immigrants from deportation.

In all, a total of 10 local governments in California voted against the state’s sanctuary law. The legislation requires all law enforcement personnel throughout the state to not communicate with federal authorities about criminal illegal aliens, except for cases where the aliens were violent or have repeat convictions. California Gov. Jerry Brown has vehemently defended the law.

The majority of Californians find it important to increase deportations of illegal aliens, according to a survey by Haas Institute for a Fair and Inclusive Society at UC Berkeley.

“Governor Jerry Brown announced he will deploy ‘up to 400 National Guard Troops’ to do nothing,” Trump wrote on Twitter. “The crime rate in California is high enough, and the Federal Government will not be paying for Governor Brown’s charade. We need border security and action, not words!”