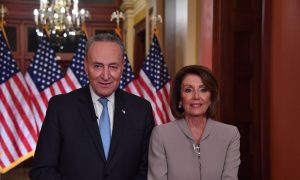 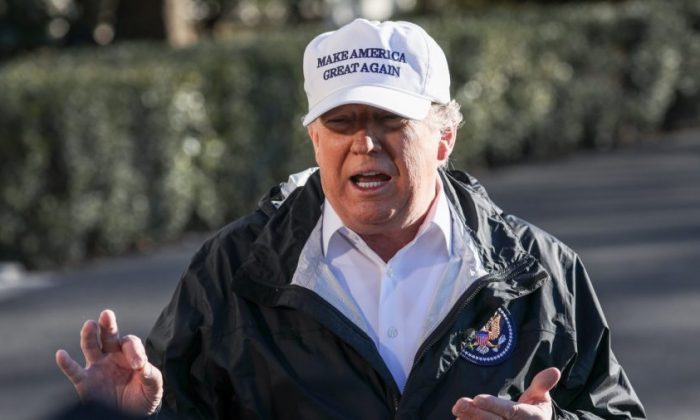 Trump Thanks Federal Workers, Calling Them ‘Great Patriots’ for Going Without Pay

“To all of the great people who are working so hard for your Country and not getting paid I say, THANK YOU—YOU ARE GREAT PATRIOTS!” Trump wrote on Twitter late Jan. 20.

“We must now work together, after decades of abuse, to finally fix the Humanitarian, Criminal & Drug Crisis at our Border. WE WILL WIN BIG!”

The shutdown started in December 2018 after Trump and Democrat leaders failed to reach an agreement on appropriations, leading to funding for some agencies expiring.

To all of the great people who are working so hard for your Country and not getting paid I say, THANK YOU – YOU ARE GREAT PATRIOTS! We must now work together, after decades of abuse, to finally fix the Humanitarian, Criminal & Drug Crisis at our Border. WE WILL WIN BIG!

Trump wants $5.7 billion for the southern border wall but House Speaker Nancy Pelosi (D-Calif.) said she’d only give him $1.

With a flood of illegal aliens pouring into the country, the Trump administration has declared a “humanitarian crisis” and argued that a wall is the best way to combat the problem. Democrats have for the most part slammed the idea despite voting en masse for barriers at the border in both 2006 and 2013.

Over the weekend, Trump proposed an offer to end the shutdown, saying that he would agree to provide temporary protection from deportation to some 700,000 illegal aliens in exchange for the border wall funding.

The three-year extension for the 700,000 illegal aliens under the Deferred Action for Childhood Arrivals (DACA) policy offers “legislative relief” that would allow for work permits, social security numbers, and protection from deportation.

A number of additional measures, such as humanitarian funding, drug-detection technology, and extending protections for people who have fled wars and disasters, were included in the proposed deal.

Pelosi rejected the offer and urged Trump to agree to reopen the government and debate border security later.

“800,000 Americans are going without pay. Re-open the government, let workers get their paychecks and then we can discuss how we can come together to protect the border,” she wrote.

Trump, though, noted that his offer was turned down before he even spoke.

“They don’t see crime & drugs, they only see 2020—which they are not going to win. Best economy! They should do the right thing for the Country & allow people to go back to work,” he wrote on Twitter.

Senate Majority Leader Mitch McConnell (R-Ky.) responded by saying that he’d bring forth legislation based on Trump’s offer despite the rejection.

“I intend to move to this legislation this week,” McConnell said in a statement after Trump’s announcement. “With bipartisan cooperation, the Senate can send a bill to the House quickly so that they can take action as well. The situation for furloughed employees isn’t getting any brighter and the crisis at the border isn’t improved by show votes. But the President’s plan is a path toward addressing both issues quickly.”

The Senate is currently composed of 53 Republicans and 47 Democrats. With 60 votes needed for appropriations, Republicans would need seven Democrats to approve such legislation if all GOP lawmakers also approve the bill.

Senate Minority Leader Chuck Schumer (D-N.Y.), who along with Pelosi has refused to reach a compromise with Trump, said in a statement that he would work to block the bill.

“Offering some protections back in exchange for the wall is not a compromise but more hostage taking,” Schumer said.

Trump, though, reminded Americans that they are already building parts of the wall.

“Don’t forget, we are building and renovating big sections of Wall right now. Moving quickly, and will cost far less than previous politicians thought possible,” he wrote on Twitter. “Building, after all, is what I do best, even when money is not readily available!”

Currently, about 654 miles of barrier exists along the nearly 2,000-mile U.S.–Mexico border. Customs and Border Protection constructed around 31 miles of new and replacement fencing in 2018, with the final 9 miles expected to be done early this year, according to the Department of Homeland Security.