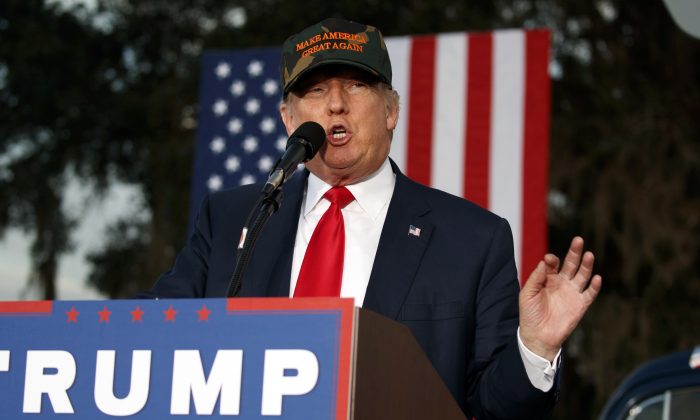 Donald Trump over the weekend blasted rival Hillary Clinton over her emails but took the time to “thank” disgraced ex-Congressman Anthony Weiner.

“We never thought we were going to say ‘thank you’ to Anthony Weiner,” Trump told an audience in one of casino magnate Sheldon Adelson’s Venetian Hotel venues on Sunday night.

“Hillary has nobody but herself to blame for her mounting legal problems. Her criminal action was willful, deliberate, intentional and purposeful,” Trump said, according to the Wall Street Journal. “Hillary set up an illegal server for the obvious purpose of shielding her criminal conduct from public disclosure and exposure. She set up this illegal server knowing full well that her actions put our national security at risk and put the safety and security of your children at risk.”

Thousands of emails were discovered by the FBI in its investigation of Weiner, leading agents to re-open the case into how Clinton handled classified information on a private email server. On Sunday, the FBI obtained a warrant to search devices used by Weiner for emails that they believe might be related to their inquest, reports said.

The FBI agents found the emails while investigating into whether Weiner violated federal laws while allegedly exchanging lewd texts with a 15-year-old girl. He’s the estranged husband of Huma Abedin, Clinton’s top aide.

The Wall Street Journal reported that a laptop used by Weiner, a former Democrat representative from New York, contains hundreds of thousands of emails. Specifically, investigators found about 650,000 emails, reported the Wall Street Journal on Sunday night, which said that “underlying metadata suggests thousands of those messages could have been sent to or from the private server that Mrs. Clinton used while she was secretary of state.”

But it’s unclear as to whether the infamous 33,000 emails that were deleted by Clinton are related to the new FBI inquiry.

The FBI actually discovered the new trove of emails from Abedin several weeks ago, according to The Associated Press, citing unnamed law enforcement sources. FBI director James Comey didn’t disclose them until Friday—11 days before Election Day on Nov. 8.

In a letter to Congress last Friday, Comey said he was told about the Abedin emails on Thursday and had agreed that investigators should review them.

The timing of the letter drew criticism from top Democrats and several Republicans, with some describing it as an unprecedented move.

“I fear he has unintentionally and negatively affected public trust in both the Justice Department and the FBI,” Holder wrote for The Washington Post on Sunday night. “And he has allowed—again without improper motive—misinformation to be spread by partisans with less pure intentions.”