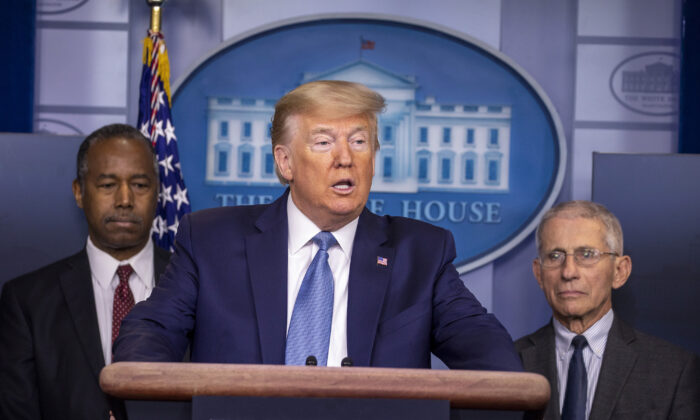 President Donald Trump speaks during a briefing in the James Brady Press Briefing Room at the White House in Washington, on on March 21, 2020. (Tasos Katopodis/Getty Images)
AMERICA

President Donald Trump said that General Motors, Tesla, and Ford have been approved to produce ventilators to combat the CCP virus surge in the United States.

“Go for it auto execs, lets see how good you are?” he wrote on Twitter on March 22.

Ford, General Motors and Tesla are being given the go ahead to make ventilators and other metal products, FAST! @fema Go for it auto execs, lets see how good you are? @RepMarkMeadows @GOPLeader @senatemajldr

Last week, Trump signed the Defense Production Act to marshal U.S. companies to manufacture medical supplies, adding that he will begin to implement the law on March 27.

White House economic adviser Larry Kudlow said that General Motors said its factories can build ventilators, while Elon Musk, Tesla’s CEO, wrote that Tesla will produce “ventilators if there is a shortage.”

Asked last week if he could name any of the private companies that would manufacture supplies for the federal government, Trump told reporters: “I will be, but first I want to get approval. I assume they’d like it but I’ll let you know. One company that has openly stated it is General Motors.”

Experts have warned that a lack of medical supplies puts workers at risk of contracting the virus while also overwhelming hospitals with an escalating number of cases. A number of state governments have requested the federal government to provide more masks, ventilators, and other supplies.

GM on March 20 said it’s collaborating with Ventec Life Systems, which makes a ventilator, to determine how it can help the firm increase its production.

At the same time, Vice President Mike Pence, leader of the White House’s coronavirus task force, said March 21 that the Department of Health and Human Services had ordered “hundreds of millions of N95 masks” for health care workers across the United States.

The United States has documented more than 33,000 cases of the CCP virus, leading to more than 400 deaths, according to data from Johns Hopkins University as of March 22.