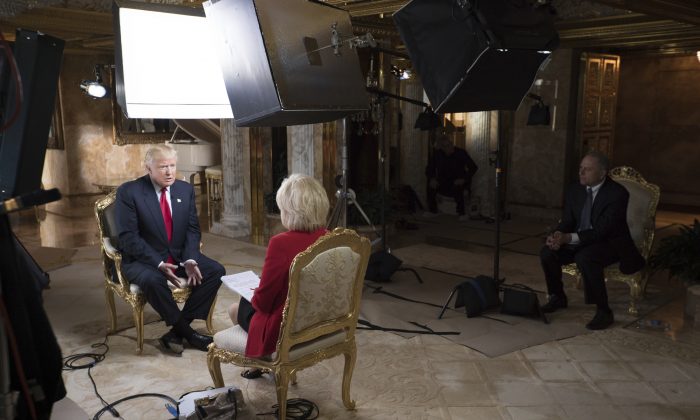 60 MINUTES Correspondent Lesley Stahl interviews President-elect Donald J. Trump at his home, in New York on, Nov. 11, 2016. The first post-election interview for television will be broadcast on 60 MINUTES on Sunday. (Chris Albert for CBSNews/60MINUTES via AP)
Politics

In last night’s interview with “60 Minutes,” President-elect Donald Trump had a message for supporters alleged to be harassing people or destroying property—”Stop it.”

“I am so saddened to hear that,” Trump told CBS’ Lesley Stahl after she noted that people of color and Muslims have been targeted.

"Stop it" Donald Trump says to any of his supporters who may be involved in threatening behavior https://t.co/PGBVkXyvcE pic.twitter.com/MjFz4ntzk7

CBS was criticized for opting not to reveal those words to his supporters sooner. The network instead promoted the interview with his comments on the Obamacare health care act. CNN’s Brian Stelter reported that CBS believed that Obamacare affected more Americans than hate crimes. “We chose to release a quote on the issue that affects the most Americans & that was his statement on Obamacare,” the statement read from CBS.

Trump, meanwhile, said that he only heard of “one or two instances” regarding hate crimes. “I would say don’t do it, that’s terrible, because I’m going to bring this country together,” Trump said.

As for Americans who expressed fear of his administration, Trump told CBS: “I would tell them, ‘Don’t be afraid, absolutely. … Don’t be afraid. We are going to bring our country back. But certainly, don’t be afraid.'”

“I’ll conduct myself in a very good manner,” he said, noting that he will still use harsh rhetoric if it’s best for the country.

That, he said, “depends on what the situation is—sometimes you have to be rougher. I say it very proudly: It’s going to be America first. It’s not going to be what we’re doing. … Sometimes you need a certain rhetoric to get people motivated.”