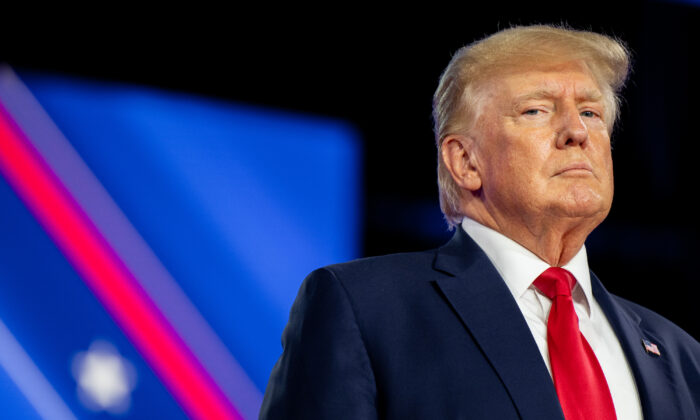 Trump Tells Americans to Brace for ‘A Lot Worse’ Than Recession, Says Only One Thing Can Fix It

Former President Donald Trump has warned Americans to brace for something “a lot worse than a recession” while blaming the Biden administration’s poor stewardship of the economy for soaring inflation and denouncing the tax hikes in the latest Democrat spending bill.

Trump made the remarks at the Conservative Political Action Conference (CPAC) in Dallas on Saturday, where the former president raised the alarm on the state of the union.

“Our country is being shot. It’s being destroyed,” Trump told attendees, while touting his administration’s record on the economy and national security.

During Trump’s tenure, the highest the Consumer Price Index (CPI) inflation gauge came in at was 2.9 percent in July 2018, while in his final month in office, January 2021, inflation clocked in at 1.4 percent.

Under Biden, inflation has climbed steadily, soaring 9.1 percent year-over-year in June 2022, a figure not seen in more than 40 years.

In his speech, Trump drew a contrast with the economy under President Joe Biden, blaming the president for the highest inflation in decades that Trump estimates is costing American families as much as $7,000 a year.

“After the pandemic, we handed the radical Democrats the fastest economic recovery ever recorded, the history of our country, ever recorded,” Trump continued. “They’ve turned that into two straight quarters of negative economic growth, also known, despite their protestation to the contrary, as a recession.”

Two consecutive quarters of negative GDP growth are a common rule-of-thumb definition for a recession, although recessions in the United States are officially declared by a committee of economists at the National Bureau of Economic Research (NBER) using a broader definition than the two-quarter rule.

Despite a number of economists arguing that the United States is in a recession based on the two-consecutive-quarters rule, the Biden administration insists that the economy isn’t in a recession, citing NBER’s consideration of a broader range of indicators.

A key argument against recession made by Treasury Secretary Janet Yellen and others in the Biden administration is that the U.S. labor market remains tight, with unemployment at 3.5 percent and, at 10.7 million, the number of job openings remaining well above the 6 million or so people classified as unemployed.

In his CPAC speech, Trump then issued an ominous warning that, absent a course correction, the recession could spiral into something even worse.

“Just hope that the recession doesn’t turn into a depression, because the way they’re doing things, it could be a lot worse than a recession,” Trump said, echoing similar remarks he made at a rally in Arizona at the end of July, where he warned that “we’re going to have a serious problem” unless political change takes place.

During his appearance at CPAC, Trump issued a call for urgent action at the polls in the upcoming midterms.

“The future of our country is at stake. We don’t have time to wait years and years. We won’t have a country left. What I used to say about Venezuela is true. We have to save the economy, defeat the Biden, Pelosi, Schumer tax hike, which is happening right now tonight,” Trump continued, referring to the so-called “Inflation Reduction Act” that cleared the Senate not long after his speech.

Senators passed the sweeping bill, estimated at $740 billion, in a 51–50 vote on Aug. 7, with the package next going to the House for consideration.

During the deliberations, Senate Democrats rejected an amendment offered by Sen. Mike Crapo (R-Idaho) that sought to ban any of the $80 billion for the Internal Revenue Service (IRS) from being used to target Americans making less than $400,000 per year.

“My colleagues claim this massive funding boost will allow the IRS to go after millionaires, billionaires and so-called rich ‘tax cheats,’ but the reality is a significant portion raised from their IRS funding bloat would come from taxpayers with income below $400,000,” Crapo said in a statement.

Crapo’s amendment was rejected on a party-line vote, with the Democrat bill including softer language that features a non-binding statement of intention not to squeeze more revenue from America’s middle class.

According to an analysis by Americans for Tax Reform, a U.S. advocacy group, the spending bill includes a number of tax hikes on American households and businesses.

This includes a $6.5 billion natural gas tax that ATR says will increase household energy bills, a $12 billion crude oil tax that will end up being passed on to drivers in the form of higher gas prices, and a $52 billion income tax hike on mid-sized and family businesses.

In a separate analysis, ATR said that the Democrat bill’s changes to the book tax threaten small businesses.

Elaborating on that theme, economist and author Antonio Graceffo wrote in an op-ed for The Epoch Times that the so-called “Inflation Reduction Act” would drive up prices for American households.

“Nearly half of these new taxes will be paid by manufacturers, creating disincentives to produce. Diminished industrial output will drive up the cost of goods and reduce the variety and quantity of goods available on store shelves,” Graceffo wrote.

“Beyond the manufacturing sector, the act increases taxes on businesses in general, which, combined with higher interest rates will decrease new investment and hamper job creation. Ultimately, these increased costs will be passed on to customers,” he added.

During his CPAC speech, Trump revealed what he sees as the key to bringing the country and its economy back on track.

“We have to win an earth-shattering victory in 2022. We have to do it, coming up in November,” Trump said.

“This election needs to be a national referendum on the horrendous catastrophes the radical Democrats have inflicted on our country,” he continued.

“The Republican party needs to campaign on a clear pledge that, if they are given power, they’re going to fight with everything they have to shut down the border, stop the crime wave, beat inflation, and hold the Biden administration accountable. They have to hold it accountable. Job number one for the next Congress,” Trump said.

The national midterm election takes place on Nov. 8, with 34 Senate seats and all 435 House seats up for grabs.