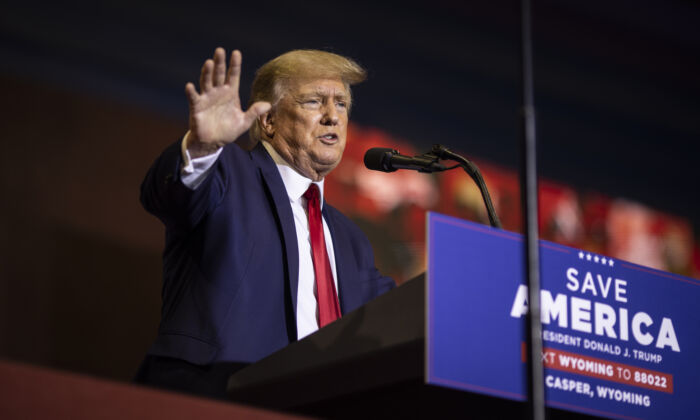 “Joe Biden and the Radical Left Democrats have just orchestrated another election enhancing money grab, this time to the tune of $300,000,000,000—and just like I predicted, it’s coming right out of the pocket of the working-class Americans who are struggling the most!” Trump said in a statement on Truth Social on Aug. 25.

“Crippling inflation, unaffordable energy prices, and WAR—all things that should never have happened,” he added.

“But if that wasn’t enough, now Americans are bailing out College Administrators who fleeced students, and those who opted for Degrees there was no way they could afford,” Trump continued. “America is a nation in decline, and the cliff into oblivion is within sight.”

Trump’s reaction came after Biden announced on Aug. 24 to deliver on his 2020 campaign promise, wiping out the federal student loan balances of millions of people—up to $10,000 in debt per individual earning less than $125,000 a year and $20,000 for Pell Grants recipients.

Critics deemed it a move to drum up support ahead of midterm elections this fall by boosting young voter turnout. More than 43 million Americans, or one in every six adults, currently owe money on their federal student debts, most of whom owe less than $25,000 on their debt, according to the Federal Reserve. Data indicate the median balance in 2021 among those with outstanding education debt was between $20,000 and $24,999.

“I will never apologize for helping America’s middle class—especially not to the same folks who voted for a $2 trillion tax cut for the wealthy and giant corporations that racked up the deficit,” Biden wrote on Twitter on Thursday, referring to a 2017 tax law signed by predecessor Trump.

To date, the balance of outstanding federal student loan debt increased more than eightfold since 1995, according to the Congressional Budget Office.

The executive action means that one-time forgiveness of $10,000 per borrower will, however, cost about $300 billion for taxpayers, or $330 billion if the program continues over the next decade, economists at the Penn Wharton Budget Model estimated. In addition, eliminating the income limit threshold would lead to a 10-year cost of $344 billion.

While some Democrats, including Senate Majority Leader Chuck Schumer (D-N.Y.), and activists had called on Biden to wipe out $50,000 per borrower, such a move could cost the federal government roughly $980 billion, according to the Penn Wharton report.

The new analysis released on Aug. 23 also shows about 70 percent of debt relief accrues to borrowers in the top 60 percent of the income distribution, despite Biden’s claim that “about 90 percent of the eligible beneficiaries make under $75,000 a family.”

Another calculation from the Committee for a Responsible Federal Budget said the newly announced cancellation would cost more, between $440 billion and $600 billion over the next 10 years, with a central estimate of roughly $500 billion.

The wide-scale loan forgiveness came weeks after Senate Democrats passed the so-called Inflation Reduction Act, claiming to reduce the deficit by about $292 billion annually. The national debt went beyond $30 trillion for the first time this year, according to Treasury Department data.

“We pay for it by what we’ve done,” the president said upon announcing his plan. “Last year, we cut the deficit by more than $350 billion. This year, we’re on track to cut it by more than $1.7 trillion by the end of this fiscal year.”

He again extended the years-long student loan payment freeze on Wednesday, pushing back a deadline that was set to expire at the end of this month to next January.