Trump Tax Returns Released, Show He and Wife Melania Had Negative Income in 4 of 6 Years 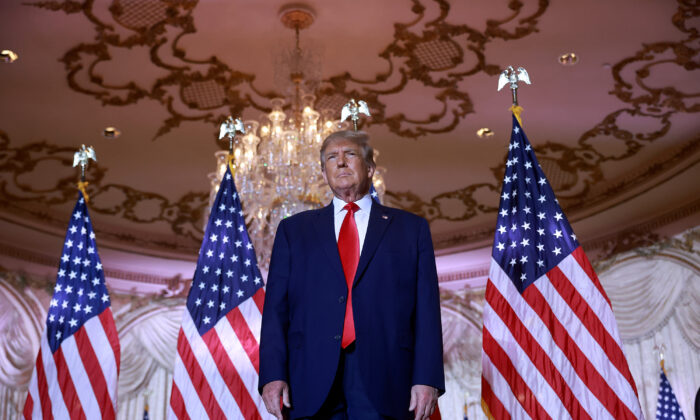 Former President Donald Trump arrives on stage during an event at his Mar-a-Lago home in Palm Beach, Fla., on Nov. 15, 2022. (Joe Raedle/Getty Images)
By Tom Ozimek

Former President Donald Trump and his wife Melania reported negative income in four of the six years covered by the couple’s joint tax returns that were released on Dec. 30, 2022, by the Democrat-controlled House Ways and Means Committee.

While the committee had earlier published a report and some documents that revealed details about the Trumps’ income and taxes paid, the panel made the full set of tax documents public on Dec. 30.

The complete assortment of tax return documents, which cover the years 2015 to 2020, consists of more than 2,700 pages of individual returns for the Trumps and more than 3,000 pages for the former president’s businesses.

Key information found in the tax returns includes the fact that the Trumps reported negative income in four of the six years covered by the documentation and paid about $1.8 million in taxes.

The release of the documents prompted a sharp rebuke from Trump, who warned that the move sets a dangerous precedent.

When the Democrat-led panel earlier released preliminary information about the Trumps’ tax returns, Rep. Kevin Brady (R-Texas), the top Republican on the House Ways and Means Committee, opposed the move and argued that the information contained in such disclosures could be spun by political foes.

“It’s the power to embarrass, harass, or destroy Americans through disclosure of their tax returns,” Brady said moments before the committee went into a closed session for a vote.

“After nearly half a century, the political enemies list is back in Washington, D.C., and we worry this will unleash a cycle of political retribution in Congress.”

Trump, in his Dec. 30 remarks, struck a similar tone, warning that the move would stoke political divisions and that it could fuel a tit-for-tat.

“The great USA divide will now grow far worse. The radical, left Democrats have weaponized everything, but remember, that is a dangerous two-way street!” Trump said.

“The ‘Trump’ tax returns once again show how proudly successful I have been and how I have been able to use depreciation and various other tax deductions as an incentive for creating thousands of jobs and magnificent structures and enterprises.”

Roger Stone, a longtime Trump ally, took to Twitter prior to the release of the documents to say he expects the tax returns to show that the former president made a lot of money but, thanks to loopholes in the tax laws, didn’t pay much in the way of taxes.

“I predict that Donald Trump’s tax returns are going to show that he made a lot of money, but didn’t pay a lot of taxes because he took advantage of all of the loopholes in the tax laws passed by the very people who are releasing his tax returns,” Stone wrote. “This makes him smart, not dumb.”

The tax returns do, indeed, support that view.

The documents (pdf) indicate that Trump’s businesses at times reported significant losses on tax returns, which can be used to offset tax liabilities.

When various eligible deductions were added, such as roughly $1.1 million in rent and $3.2 million in depreciation, another $19 million in negative income was added, bringing the total so-called ordinary business income for that year to negative $59.9 million.

Many of Trump’s real estate businesses, including golf courses, lost money in 2020 amid the pandemic, the documents show, which explains why he ended up being able to slim his tax bill.

The ability to offset tax liabilities by business operating expenses is also why, in three of the six years covered by the returns—2015, 2016, and 2017—Trump reported an income tax liability of just $750.