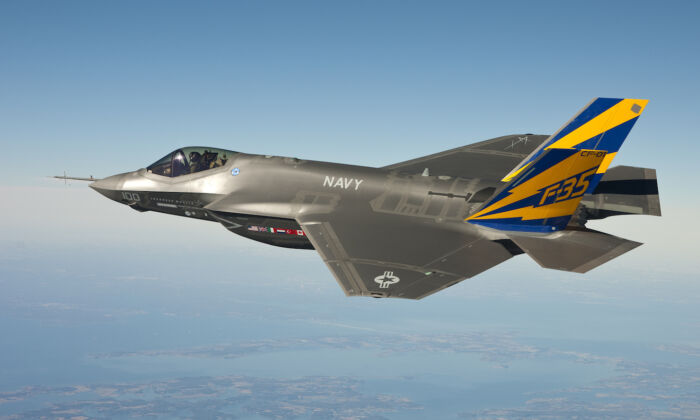 WASHINGTON—President-elect Donald Trump is vowing to corral the “out of control” cost of the F-35 Joint Strike Fighter. But congressional Republicans and Democrats, aware of the tens of thousands of jobs the aircraft generates in 45 states, will be wary of any plans by Trump to cut the program.

The F-35 program and cost is out of control. Billions of dollars can and will be saved on military (and other) purchases after January 20th.

Once Trump is in office, he can propose deep cuts to the F-35 or even elect to cancel the program altogether. But Congress, not the president, controls the government’s purse strings and makes the final decisions about the budget.

Built by defense giant Lockheed Martin, the nearly $400 billion price tag for the F-35 makes the program the Pentagon’s most expensive weapons acquisition ever. Despite the huge cost, the program has strong bipartisan support in Congress, where lawmakers view the aircraft as essential to national security.

After Trump’s tweet, Lockheed Martin’s shares tumbled, wiping out nearly $4 billion of the company’s market value. The F-35 program made up 20 percent of Lockheed’s total 2015 revenue of $46.1 billion. U.S. government orders made up 78 percent of its revenue last year.

“Whoever has this airplane will have the most advanced air force in the world. That’s why we’re building the F35,” said Jeff Babione, general manager of the F-35 program, at a base in Israel. “That’s why it’s important to not only the U.S., our partners and our partners like the Israeli Air force to have this airplane.”

Q&A: A Look at Trump’s Call to Cancel New Air Force One

The F-35, which uses stealth technology to avoid being detected by radar, is being built in different configurations to be used by the Air Force, Navy and Marine Corps. The Navy’s version, for example, is designed to take off and land on an aircraft carrier.

Current plans call for the United States to buy nearly 2,500 F-35s. Close to $13 billion will be needed annually between 2016 and 2038 to hit that procurement number, according to the Government Accountability Office.

While the F-35 had massive budget overruns early on, the cost has stabilized and even dropped a bit following tough negotiations between the Pentagon and Lockheed Martin, according to Todd Harrison, a defense budget expert at the Center for Strategic and International Studies.

“Trump is unlikely to squeeze more blood out of this rock,” Harrison said.

Companies from 45 states are involved in the F-35’s production, with Texas, Georgia, California, Arizona and Florida playing the leading roles in testing and manufacturing the jet fighter. The company is teamed with more than 1,250 domestic suppliers to produce thousands of components ranging from highly sophisticated radar sensors to parts of the aircraft’s fuselage, according to Lockheed Martin.

The Lockheed Martin plant where the F-35 is being built is located in Texas Republican Rep. Kay Granger’s district. She’s vice chair of the defense appropriations subcommittee. Rep. Mac Thornberry, the Republican chairman of the House Armed Services Committee, represents the district next door to Granger’s.

Thornberry’s committee has supported buying more F-35s than the Obama administration had asked for in its budget request. The F-35 will replace an aging inventory of U.S. aircraft that many lawmakers believe are becoming increasingly unsafe to fly.

Claude Chafin, a committee spokesman, said Thornberry “shares the president-elect’s determination to have the Pentagon get weapons in the hands of our troops faster, while being better stewards of the taxpayer dollar.”

The tweet on the F-35 marks the second time in a week Trump has blasted U.S. aircraft spending. Last week, he tweeted that costs to build new presidential planes by Boeing Corp. were “out of control” and ended the tweet with “Cancel order!”