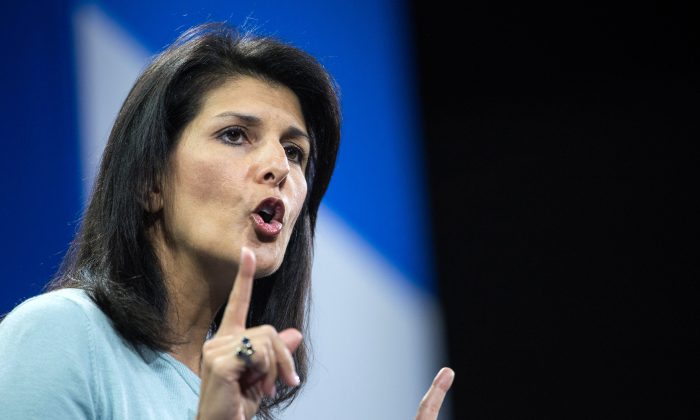 President-elect Donald Trump has chosen South Carolina Gov. Nikki Haley as U.S. ambassador to the United Nations, the first woman tapped for a top-level administration post during his White House transition so far.

Two sources familiar with the decision, who requested anonymity because they weren’t authorized to discuss it by name ahead of the announcement, also said that the ambassadorship will be a Cabinet-level position.

Haley, an outspoken Trump critic throughout much of the presidential race, would become his first female—and first nonwhite—Cabinet-level official if confirmed by the Senate. She’s the second Asian-American to serve as a U.S. governor.

Not all presidents have treated the ambassadorship to the U.N. as a Cabinet-level position, and Republicans have tended not to grant that status.

Haley’s new job clears the way for Lt. Gov. Henry McMaster to step into the role of South Carolina governor. McMaster was an early Trump endorser, backing him before the state’s GOP primary in February.

At the time, Haley campaigned for Florida Sen. Marco Rubio, before going on to support Texas Sen. Ted Cruz. Despite misgivings about Trump, she met with the president-elect last week at Trump Tower. Afterward, Haley said they’d had a “very nice” conversation.

Trump is spending Thanksgiving with his family at his Mar-a-Lago estate in Palm Beach, Florida.