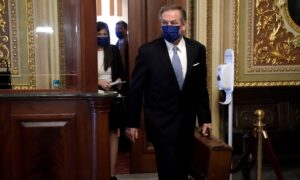 Former President Donald Trump surprised supporters in Florida on Monday, driving by them in a black SUV.

Trump waved to people lining both sides of a road in West Palm Beach, as onlookers cheered and snapped pictures.

“We love Trump! We love Trump!” people shouted as the car that Trump was riding in moved slowly by. They later erupted in chants of “USA! USA!”

A number of pro-Trump and American flags were waving in the breeze.

The crowd was gathered to celebrate President’s Day.

Trump was driving from the Trump International Golf Club, where he was spotted playing golf.

The drive-by evoked memories of Jan. 20, when Trump was transported past supporters to his Mar-a-Lago resort after flying to Florida from Washington.

Since then, Trump has rarely appeared in public.

Trump’s former and current advisers, though, have regularly appeared on TV stations and social media, saying he will be engaged to help Republicans flip the House of Representatives and Senate in 2022.

But some leading Republicans sided with Democrats against Trump in the second impeachment saga and argue he is no longer the head of the party.

House Conference Chair Liz Cheney (R-Wyo.) voted to impeach Trump, along with nine other Republicans. And Senate Minority Leader Mitch McConnell (R-Ky.) delivered a scathing speech on the Senate floor over the weekend, blaming the former president for the Jan. 6 breach of the U.S. Capitol.

“January 6th was a disgrace. American citizens attacked their own government. They use terrorism to try to stop a specific piece of domestic business they did not like. Fellow Americans beat and bloodied our own police. They stormed the center floor. They tried to hunt down the Speaker of the House. They built a gallows and chatted about murdering the vice president. They did this because they’d been fed wild, falsehoods by the most powerful man on earth because he was angry. He lost an election,” McConnell told colleagues.

McConnell and 42 other Republican senators voted to acquit Trump, in large part because they felt the trial was unconstitutional since he’s now a private citizen. But seven Republicans joined Democrats in calling him guilty of incitement, including former Republican presidential nominee Sen. Mitt Romney (R-Utah.).

Trump in a statement after the vote accused Democrats of fomenting riots and defaming law enforcement while pushing for censorship of people and viewpoints they oppose.

He also declared himself “a champion for the unwavering rule of law, the heroes of law enforcement, and the right of Americans to peacefully and honorably debate the issues of the day without malice and without hate.”

Trump teased a comeback, telling supporters: “We have so much work ahead of us, and soon we will emerge with a vision for a bright, radiant, and limitless American future.”