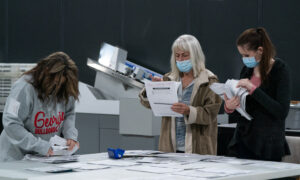 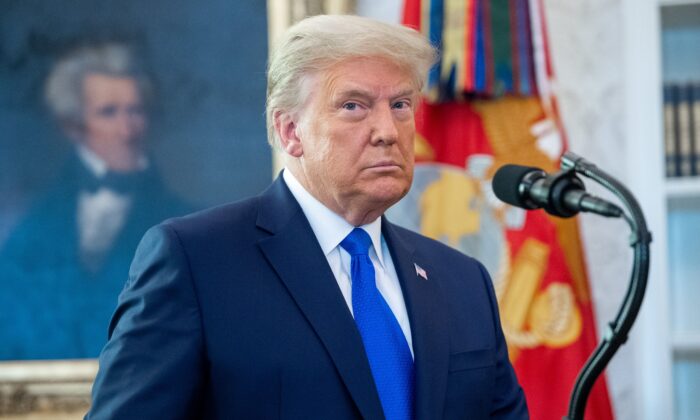 President Donald Trump looks on during a ceremony in the Oval Office of the White House in Washington on Dec. 7, 2020. (Saul Loeb/AFP via Getty Images)
Donald Trump

Trump: Supreme Court ‘Has a Chance to Save Our Country’

President Donald Trump asserted on Thursday that the nation’s highest court can save America, depending on what happens in the coming weeks.

“The Supreme Court has a chance to save our Country from the greatest Election abuse in the history of the United States,” the president wrote in a social media statement.

Trump was referencing the major lawsuit brought by Texas this week to the Supreme Court.

Texas Attorney General Ken Paxton sued Pennsylvania, Georgia, Michigan, and Wisconsin, arguing the states changed election laws in violation of the U.S. Constitution and that the relaxation of ballot rules led to irregularities.

Seventeen states in a filing urged the nation’s top court to take up the challenge.

Changes to mail-in ballot procedures “removed protections that responsible actors had recommended for decades to guard against fraud and abuse in voting by mail,” the states alleged in the brief.

Trump highlighted the filing, writing: “Wow! At least 17 States have joined Texas in the extraordinary case against the greatest Election Fraud in the history of the United States. Thank you!”

In separate motions, six states asked asked the Supreme Court to let them intervene in the lawsuit; Ohio argued against the relief sought by Texas; and 22 states filed a brief in opposition to the suit.

The battle lines are primarily inter-party, though Ohio’s attorney general is Republican.

Trump and fellow Republicans have alleged fraud and other irregularities led to the election being stolen from the president. Democratic presidential nominee Joe Biden has declared victory and Democrats have asserted the election was conducted smoothly with insignificant levels of fraud.

Biden’s team didn’t respond to a request for comment.

Leading up to Nov. 3, Trump often said the Supreme Court would likely need to weigh in on election-related legal battles.

“I think this will end up in the Supreme Court,” he told reporters in September. That month, he defended filling the vacancy left by the death of Justice Ruth Bader Ginsburg because of the need for nine justices to hear election cases.

“We need nine justices. You need that. With the unsolicited millions of ballots that they’re sending—it’s a scam, it’s a hoax. Everybody knows that. And the Democrats know it better than anybody else,” Trump said.

Trump also told “Fox & Friends” around the same time that he would respect the election results if the Supreme Court ruled that Biden won.

Trump ended up nominating Amy Coney Barrett to the seat Ginsburg left. Barrett was confirmed by the Senate, giving Trump three appointees on the court and making the number of Republican-appointed judges six.

Amid the fracas triggered by the Texas case, Trump met with attorneys general at the White House on Thursday. A list of attendees wasn’t released and the president didn’t have a scheduled press conference.