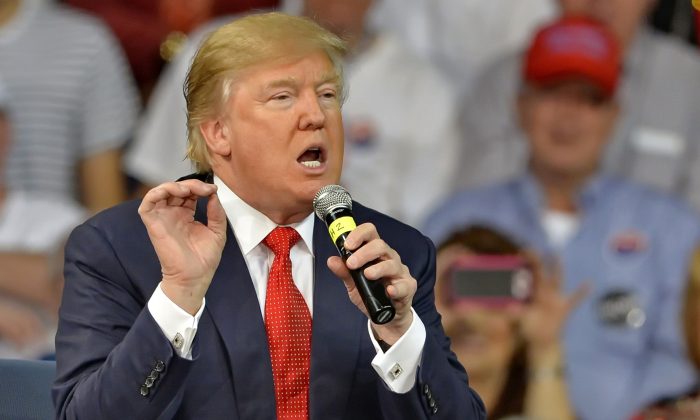 In this Dec. 12, 2015, photo, Republican presidential candidate Donald Trump speaks at a town hall meeting in the Convocation Center on the University of South Carolina Aiken campus in Aiken, S.C. Trump's supporters don't see his plan to ban Muslims from entering the U.S. as "xenophobic" or an "appeal to hate," but rather as an entirely reasonable response to a clear and present threat. (AP Photo/Richard Shiro)
Politics

GREER, S.C.—The fuss over Donald Trump seems largely lost on many of those who support him. Where his critics see bigotry, they see common sense.

At Rosie’s Hotdogs in upstate South Carolina, Tracy Hooker isn’t interested in debating the merits of Trump’s proposal to temporarily block Muslims from coming into the United States.

She knows some people think it’s xenophobic. That others argue it’s impractical, legally dubious or both. And that every other Republican running for president has, in some way or another, rejected the idea that the plan is even worth talking about.

That’s why she says Trump is “my guy.”

He’s the only one who gets it.

To dozens of Trump supporters interviewed in the past week by The Associated Press in the first-to-vote states of Iowa, New Hampshire and South Carolina, the near universal condemnation of the billionaire’s plan is simply baffling.

And, they say, they marvel at how naive all the critics sound.

After the Paris and San Bernardino, California, attacks, they say only Trump is taking on what they believe is a clear and present danger to the U.S.

“When you’re in war, you have to take steps that are not American to protect yourself and defend the country,” said Margaret Shontz, of Cedar Falls, Iowa, as she arrived at a Trump campaign stop in Des Moines on Friday.

Trump’s call to bar Muslims from coming to America is “awesome.”

By their own description, Trump supporters are frustrated and angry about the direction of the nation. They fret over the economy, feel betrayed by the nation’s immigration policy and worry America has lost its way on the world stage.

In interviews with the AP, they argued Trump’s plan for Muslims who want to come to the U.S. is a bold proposal that regular politicians are too timid to make. They feel the criticism that comes from those same politicians is rooted in the weakness Trump promises to sweep away.

Iowa’s Dale Witmer, 90, a registered Republican and World War II veteran who likes Trump and Texas Sen. Ted Cruz, embraced the Muslim ban as a “great idea.” While he has concerns about Trump’s unfiltered style, he praises him for talking about things he says others are thinking but afraid to say themselves.

“I’d like to go back (to) when I was younger in the ’50s and ’60s, when the country was a little better, Witmer said. “It was America then. I’m starting to worry we’re starting to lose identity in this country, I do believe.”

And the backlash against Trump? “I don’t know how to comprehend that.”

Many of Trump’s supporters called the reaction to his plan yet another example of the Republican establishment and a biased media trying to stop a candidate who refuses to play by their rules.

Dan Edwards, a retired banker from Van Meter, Iowa, who brought his family to Trump’s town hall meeting in Des Moines on Friday, said Trump’s words were taken out of context to make his plan sound more extreme.

Edwards, 53, compared the proposal to a “time out” while the country re-assesses the situation. “I think it’s been made into something it wasn’t meant to be,” he said. “I think basically what he’s doing is saying, ‘OK, wait a minute. Refugees, we need to make sure we know what we’re looking for and to make sure everything is in place.'”

Trump made the proposal a week ago, calling for “a total and complete shutdown of Muslims entering the United States until our country’s representatives can figure out what the hell is going on.”

Trump’s campaign said the proposed ban would apply to “everyone,” including individuals seeking to immigrate to the country as well as those looking to visit as tourists.

When asked by the AP if the ban would apply to U.S. citizens traveling, working or living abroad, including American servicemen and -women who are Muslim, Trump responded via a spokeswoman, “You figure it out!”

As the week progressed, Trump began to fill in additional details. He said American citizens, including Muslim members of the military, would be exempt, as would certain world leaders and athletes coming to the U.S. to compete.

New Hampshire state Rep. Stephen Stepanek, Trump’s campaign co-chairman in the state, said the reaction to Trump’s proposal fit the pattern of his campaign: First outrage, then a realization Trump hit the nail on the head.

“He’s always one step ahead of all the other politicians in pointing out a problem,” he said. “And everybody’s outraged. And then all of a sudden they start analyzing what he said and realize, ‘Oh my god, he’s right.'”

“I think it’s a fabulous idea,” Stepanek said. “Because our system is broken and what has happened in San Bernardino is an example of a tip of the iceberg.”

But Republicans are far more receptive: 54 percent voiced support for the ban in the CBS poll.

During a 29-person focus group made up mostly of Trump supporters in a Washington suburb last week, just eight participants said they disagreed with Trump’s proposal. Seventeen raised their hands when asked if they agreed.

Republican pollster Frank Luntz, who led the group, said in his 23 years in the business, he’s never seen a phenomenon quite like Trump.

“He defies every assumption that was laid out,” Luntz said. “He has created or found the magic formula. And he has been using it more successfully than anyone — including me — ever imagined.”

While Trump has brushed back criticism, including from some Republicans, that his idea smacks of bigotry, some of his backers take that charge personally.

“I felt like I’m being insulted,” said Edwards, the banker from Iowa. “I’m feeling strongly about my country, and I feel attacked when they’re going against him in that way.”

Others saw it as a badge of honor.

“Being compared to Hitler is how you know you’ve reached the apex,” said Gary Hopper, 58, of Bedford, New Hampshire.

At Cannon’s restaurant in Greer, not far from Rosie’s Hotdogs, manager Tammy Holcombe argued “everybody’s getting too offended by this.” Another Cannon’s employee, 50-year-old Wayne Weathers, chimed in: “The drive-by media says everybody’s a racist who supports Trump. That’s ridiculous.”

Holcombe said she doesn’t have a problem applying a religious test to visitors, immigrants and refugees.

“I’m a Christian, and they’re all against that, so why not?” she said, adding that U.S. leaders should “man up, grow a backbone and quit worrying about the little things and focus on the big picture of everything, not just immigration.”

“I know we all came from somewhere else,” she added, “but this is a different time now.”

Back at Rosie’s, Hooker made a point to say that among her hundreds of Facebook friends, “a few of them are Muslims. One’s even an atheist.”

But she said she’d be willing to bar American citizens who are Muslim and travel outside the country from returning home — a position that goes far beyond what Trump has proposed.

“Look, if I let you borrow my shoes from my house, when you bring them back, I’m not going to bring them back in until I reassess and see what I’ve got,” she said.

Among Trump supporters, even those who agree with his proposal, some have concerns — usually about how the bombastic former reality TV star is selling his ideas.

“I agree with him, mostly,” said Greg Spearman, 46, who owns an electrical firm in Greer. “But there’s certainly a better way to say it.”

Still other backers said they simply don’t take Trump’s plan at face value. Some argued he was deliberately being provocative in search of attention, while others said he was simply trying to raise an alarm and would take a more measured approach if he makes it to the White House.

Trump himself has even suggested his proposed ban was intended to stir up reaction: “Without the ban,” he said Sunday, “you’re not going to make the point.”

Billy Montplaisir, a 27-year-old maintenance worker who lives in Weare, New Hampshire, said he likes “everything about” Trump — but nonetheless felt uncomfortable with the proposal. He worried it would play into the hands of Islamic radicals and risked turning the “good ones against us.”

“The Muslim thing, that kind of blew me out,” Montplaisir said. “He kind of went a little overboard there.”

Still, Montplaisir is sticking with Trump and plans to vote for him when New Hampshire holds the first primary of the campaign.

“I like how he’s just up front,” he said, “and doesn’t care what people think.”