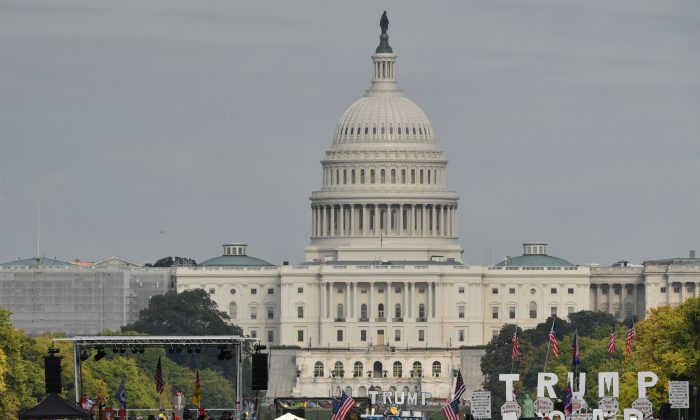 Demonstrators wave national flags in front of the United States Capitol in a pro-Trump 'Mother of All Rallies' on the National Mall in Washington, D.C. on Sept. 16, 2017. Supporters of President Donald Trump gathered in the US capital to show support of "free-speech" and to celebrate America. (PAUL J. RICHARDS/AFP/Getty Images)
US

At a time when political tension seems to have reached a breaking point, one rally in Washington, D.C. shows how communication—if done outside the lines of protest—can break down political barriers.

Donald Trump supporters at a “Mother of all Rallies” (MOAR) on Saturday, Sept. 16, showed the power of open dialogue when an organizer invited a group of Black Lives Matter (BLM) protesters to share their message on stage, saying the rally was about “freedom of speech” and “celebration.”

“So you guys know that the ‘Mother of All Rallies’ was to end the political violence,” organizer Tommy Hodges told the BLM group.

“So what we’re going to do is something you’re not used to, and we’re going to give you two minutes of our platform to put your message out. Whether they [referring to the crowd, which he described as not all Trump supporters] disagree or agree with your message is irrelevant. It’s the fact that you have the right to have the message.

“It’s your right to say what you believe. And it’s their right [gesturing to the crowd] to let you know what they think about what you’re saying.”

Then he handed the microphone to Hawk Newsome, president of BLM of greater New York.

“I am the president of Black Lives Matter New York,” Newsome said to boos from the crowd. “And I am an American,” he said to cheers.

“And the beauty of America is that when you see something broke in your country, you can mobilize to fix it,” he added.

He talked about the goals of BLM, and expressed his belief that justice is not being served for all people. He also attempted to downplay BLM’s reputation as an anti-police organization.

“We are not anti-cop,” he shouted to a skeptical crowd. “We are anti-bad cop. We say if a cop is bad, he needs to get fired like a bad plumber, a bad lawyer, like a bad [expletive] politician,” he continued, which drew cheers from the crowd.

Newsome made obvious attempts to connect to the crowd: “I am a Christian. I don’t think my bible is any different than yours when it says ‘love thy neighbor'” he said.

“You’re so right—all lives matter” he added, but not all his statements were bonhomie.

After the rally, Newsome told Now This that he didn’t think anybody changed their political views, but felt they had come together as Americans.

“Just person to person, I think we really made some substantial steps,” he said.

Describing some of the positive interactions he had with the Trump supporters after the rally, he said, “That’s the power of communication.”

Organizer Hodges said this was the goal of the rally.

“You should be able to say whatever you want without someone raising a fist against you,” he told the Washington Post. “It’s time to bring everyone together and get everybody to celebrate America together.”