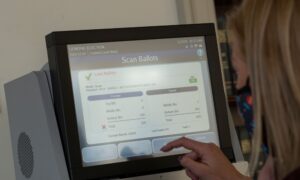 In Atlanta, Georgia, dozens of Trump Supporters honked their horns and raised their flags to protest the state’s handling of the 2020 election. The car rally was organized by MAGA Drag the Interstate, which is active in all 50 states.

“He needs to stand up for, not just Georgians, but to set an example for the country and to stop the election from being certified, especially in our state, and actually acknowledge that there was fraud, not just in our state, but nationwide,” said Savage.

Trump supporters drove around the governor’s neighborhood to make their voices heard.

One supporter said the governor was only a Republican in name and that the recount was useless.

“He should have done an audit to find out if the signatures matched, to find out if the times were right. That would have shown a huge difference. And I believe that the law cases that are coming up are going to be able to indicate that to the people,” said Carl Stokes.

Another supporter said there should also be a change to how long a person needs to live in Georgia in order to vote in the state.

“He needs to get a special session in, get legislature to extend the residency to vote in Georgia, now it’s thirty days, and we recommend him changing that to 90 days, so other people from other states don’t just come over here, register to vote for runoff, and then leave,” said Lonnie Vo.

Savage said that her organization will call on people from all 50 states to meet in Georgia, where President Trump will make an appearance. The rally is expected to happen on Dec. 5.