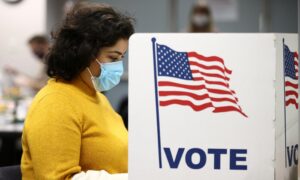 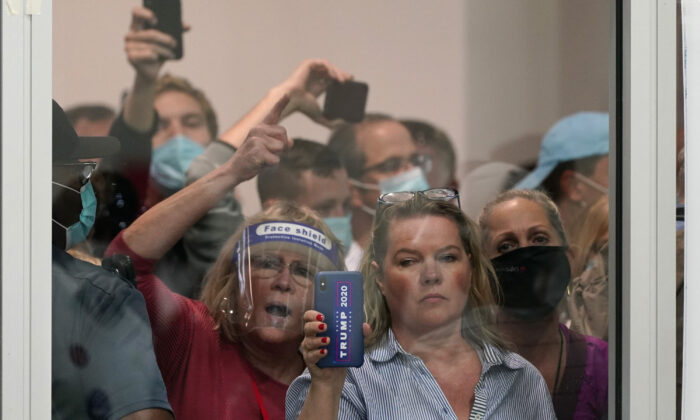 People look through the windows of the central counting board in Detroit, Mich., on Nov. 4, 2020. (Carlos Osorio/AP Photo)
2020 Election

As vote tallies rose against President Donald Trump, many of his supporters converged on vote-counting centers in Detroit and Phoenix Wednesday and more have planned to come out Thursday to protest.

Trump voters and conservatives are demanding that all legal ballots be counted and to stop the counting of votes until monitors are allowed proper access to the process. “Stop the count!” the Trump supporters chanted in Detroit. “Stop the steal!” they said in Phoenix.

The Trump campaign has filed lawsuits in Arizona and Michigan against the way the ballots are being counted. Trump has insisted for many months that bulk mail-in voting leads to fraud, while his opponents have repeatedly said there is no evidence for that.

Phoenix supporters, wearing MAGA gear, packed the parking lot at the Maricopa County election center, with some in the crowd chanting “Fox News sucks” after the network prematurely declared Joe Biden the winner in Arizona.

Michigan House of Representatives member Matt Maddock (R) posted a message on his Facebook claiming suspicious activity by Democrats at the polls and asking more people to observe.

“Dems are doing every trick in the book to obstruct poll watchers,” wrote Maddock. “They are denying access, blocking poll watchers from seeing the voter lists, shutting down elevators, chaining exit doors shut, telling new volunteers to leave as they arrive, prohibiting volunteers from returning when they leave, and more.”

Maricopa County Elections Department spokeswoman Megan Gilbertson told the Associated Press that vote counting went on into the night while several sheriff’s deputies blocked the entrance to the building.

Two top county officials—one a Democrat, the other a Republican—issued a statement expressing concern about how misinformation had spread about the integrity of the election process.

“Everyone should want all the votes to be counted, whether they were mailed or cast in person,” said the statement signed by Clint Hickman, the GOP chair of the Maricopa County Board of Supervisors, and Democratic Supervisor Steve Gallardo. “An accurate vote takes time. … This is evidence of democracy, not a fraud.”

Brandon Straka, who started the Walkaway movement, also told his social media followers he and other conservatives are planning protests in states with disputed or questionable election results, like Michigan and Arizona. He told his audience to join him at 7 p.m. in Detroit to protest.

Earlier, the Republican campaign filed suit in a bid to halt the count, demanding Michigan’s Democrat secretary of state allow in more inspectors.

Michigan Attorney General Dana Nessel, a Democrat, insisted both parties and the public had been given access to the tallying, “using a robust system of checks and balances to ensure that all ballots are counted fairly and accurately.”

Michigan has been on edge for months over fears of political violence. Gun rights activists open-carried into the state Capitol during protests over coronavirus restrictions in the spring, and six men were arrested last month on charges of plotting to kidnap Democrat Gov. Gretchen Whitmer.

On Election Night, some protests broke out after voting was halted, stretching from Washington, D.C., to Seattle, but there was no widespread unrest or significant violence.

The prolonged task of counting this year’s deluge of mail-in votes raised fears that the lack of clarity in the presidential race could spark unrest.