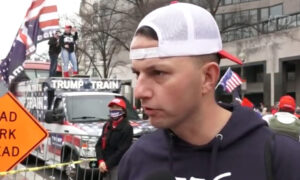 WASHINGTON—Mark Fast wasn’t disappointed by the Supreme Court’s decision to reject Texas’s lawsuit against four other states when he joined in with thousands of protesters the next day in Washington, petitioning the government for fair elections and transparent counting.

“The perfect opportunity is still yet to come in regards to correcting the vote fraud problem, which is systemic,” he said. “Election Day is a hallowed day, to vote in a point in time, not over a span of time, and to be there physically to prove it’s you who’s voting.”

Besides, the Texas suit also showed people which politicians were willing to side with President Donald Trump, and which weren’t, Fast explained.

“Other candidates, if they don’t realize the power and passion that’s behind Trump and this movement, it’s really a movement, if they don’t get behind it, their career will end,” he said, pointing to Ohio reactions to their attorney general not backing the Texas lawsuit. “Anyone who’s not enthusiastic about the Trump policies at the very least, they can dislike his tweeting, but if they’re not enthusiastic about America First, they don’t have a prayer in politics after this.”

Some media have said the election is over, but Americans know that’s not true. “If we’re following the Constitution, the election is not over,” he said, adding that states’ own constitutions have been violated in this election.

“Americans like you, me, him, and all the people around here aren’t stupid, they can tell when they’re being lied to by the media, and so they can see through the vast efforts to stop freedom of speech as well as to misinform,” Fast said. “That’s the other beauty of this whole thing happening right now, is that people are seeing the lies that have been perpetrated in our political system both by the media and the typical politician. So they’re waking up to that.”

Fast expects that if Joe Biden and Kamala Harris do get into office, “neither one of them will have much gravitas, respect, or power, because people realize it was a fraud that was perpetrated on the American people and that will become more and more evident.”

“The evidence isn’t going to go away,” he said. “And people who don’t get behind the exposing of the fraud are going to be exposed as frauds themselves.”

“Voters aren’t stupid. They’re going to remember this. So people who are in positions of power need to wake up, and put the light of truth on what has actually happened here. And once that happens, there’s no stopping the American people, and no destroying the American Constitution,” he said.