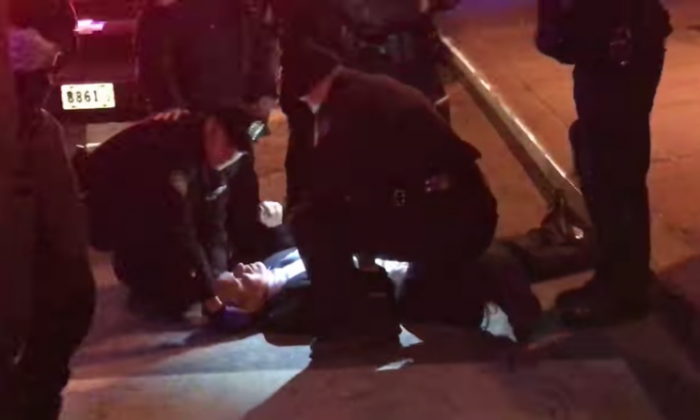 The victim of an attack lies of the sidewalk in New York City on Jan. 20, 2018. (Jon Levine/TheWrap)
Crime and Incidents

A 56-year-old man attending a gala celebrating the anniversary of President Donald Trump’s inauguration Saturday night was knocked down with a punch to the head and strangled by a black-clad member of the Antifa communist extremist group, WCBS reported.

A video from the scene of the attack showed the victim bleeding on the sidewalk as police officers surrounded the handcuffed attacker. The victim was transported to Bellevue Hospital and listed in stable condition.

The gala, arranged by independent journalist Mike Cernovich, took place at the FREQNYC nightclub on W. 50th St. According to Daily News, the attack occurred at 10:30 p.m.

“I saw him hit the old man,” witness Ali Thomas told Daily News. “One hit. He swung hard. He hit him hard. The old man’s head hit the curb.”

The mob also surrounded and trapped James O’Keefe, the president of Project Veritas, an undercover journalism outlet which recently published a series of reports exposing censorship, bias, and invasion of privacy by Twitter. O’Keefe retreated behind a line of police officers.

“Antifa spotted me walking outside Cernovich Night for Freedom, had me surrounded, bypassed NYPD, started to charge, had to turn phone off as was trapped in violent mob for 10 minutes with a few cops escorting me to car,” O’Keefe wrote on Twitter.

Antifa spotted me walking outside @Cernovich Night for Freedom, had me surrounded, bypassed NYPD, started to charge, had to turn phone off as was trapped in violent mob for 10 minutes w a few cops escorting me to car, jumped into backseat of @ImAndrewMarcus car. @JackPosobiec pic.twitter.com/MD2KDYLxmM

Several other people were injured during and after the event, including a police officer, according to NYPD.

Cernovich, the organizer, called the mob of protesters “terrorists” after the event.

The event was billed as a “gathering of patriots and political dissidents who are bored with mainstream political events.” The festivities included a DJ set, a comedy routine, and speeches.

Antifa is currently being investigated by the FBI for domestic terrorism. A joint intelligence assessment by the FBI and the Department of Homeland Security (DHS) described Antifa as committing terrorist activities as early as last year.

The confidential documents, first reported on by Politico, show that the intelligence assessment led the DHS under the Obama administration to formally classify the activities of Antifa as “domestic terrorist violence.”

The organization was founded in Germany in the 1920s as the violent wing of the Communist Party of Germany (KPD), which at the time was trying to establish a communist dictatorship in Germany. Part of its role was to brand any form of capitalism and all rival political parties, including even social democrats, as “fascist.”