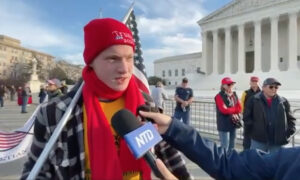 Trump Supporter at DC Rally: ‘People Have to Wake Up’

Craig Pickrel, a home builder and Trump supporter, spoke to an NTD reporter at the DC Rally on Dec. 12:

“I’m in DC, you stand around and you understand our history, we are a nation under God. And we were founded there, we have a covenant with God from the very beginning, and that’s been stolen, trying to be stolen right now. We have to return to that. I think it is a battle of good and evil.”

“Honesty should be the rule, you know, the truth should be the rule. That’s the thing that’s missing in this country right now—is a passion for the truth. And these folks are all about the lie. And so again, we have to rise up with alternatives, we have to call them out for who they are. But then we have to rise up with alternatives. We can’t just sit around and allow them to promote the lie. You know, when you’re trying to have a free society that’s being only communicated with a lie, you can’t be free, so we have to have the truth to be free, so people have to wake up. We blame the media. The media is in bed with the left, the media is in bed with what’s evil about this country right now. So what do we have to do? We have to rise up with alternative evils. But most important thing is people need to wake up, the people need to understand what’s going on, and then demand the truth. If we forget our past, if we don’t understand where we came from, then we won’t like where we end up. And so I think people have to have to quit being naive, and they have to understand where we came from, and then they can understand what’s going on and figure out, definitely things need to change. We need to return to where we came from.”

This video is part of our special series ‘What Voters Say.’  To watch more videos click here.