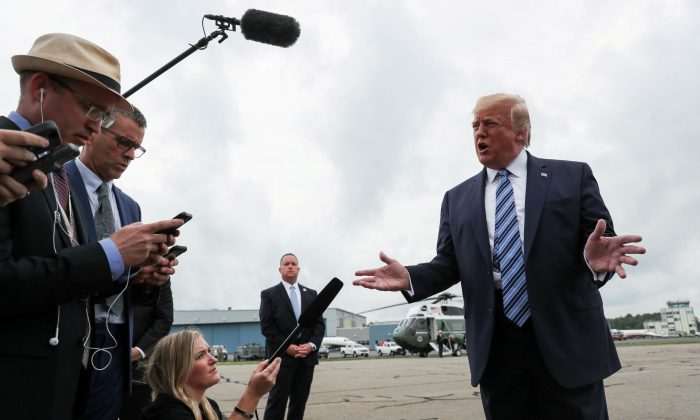 President Donald Trump on Aug. 15 suggested that if Chinese leader Xi Jinping personally met with Hong Kong protesters, a resolution to the current extradition bill crisis could be reached.

Hong Kong is seeing its eleventh straight week of mass protests against Beijing’s growing encroachment into the city.

“If President Xi would meet directly and personally with the protesters, there would be a happy and enlightened ending to the Hong Kong problem. I have no doubt!” Trump wrote in a tweet.

If President Xi would meet directly and personally with the protesters, there would be a happy and enlightened ending to the Hong Kong problem. I have no doubt! https://t.co/eFxMjgsG1K

His comments came less than a day after he offered to meet with Xi to resolve the issues in Hong Kong, also via Twitter.

“I know President Xi of China very well. He is a great leader who very much has the respect of his people. He is also a good man in a ‘tough business,’” Trump tweeted on Aug. 14 evening.

The ongoing protests centers around a now-suspended extradition bill that would allow anyone in Hong Kong to be transferred to mainland China for trial, where there is no rule of law. It has since swelled into greater calls for democracy.

Trump also mentioned Hong Kong in another series of tweets on Aug. 14 about the trade dispute with China.

“Of course China wants to make a deal. Let them work humanely with Hong Kong first?” He wrote.

In response to the tweets, Chinese Foreign Ministry spokesperson Hua Chunying on Aug. 15 suggested that the United States should not intervene in the matter.

Hua did not directly respond to Trump’s invitation to personally meet with Xi, saying, “the Chinese and US Presidents have remained in contact with each other via meetings, phone calls, and letters.”

Welcome Emperor Xi come to HK and meet with protesters directly and openly during demonstration 👍🏻 https://t.co/I2zFbsLeZa

Lo Kin-hei, vice chair of the Democratic Party of Hong Kong and a local district councillor, said he agreed with the president’s comment.

okay, I must agree with Donald Trump this time. 👍👍👍 https://t.co/UPj9L2luUX