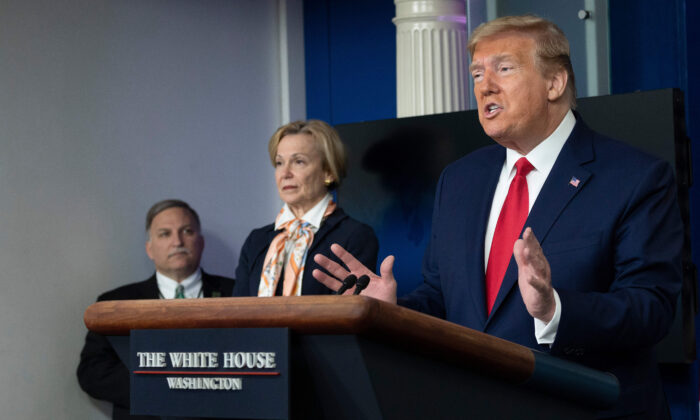 President Donald Trump suggested on Saturday that he would re-evaluate the United States’s relationship with China after the outbreak of the CCP (Chinese Communist Party) virus, commonly known as novel coronavirus.

“Our relationship with China was good until they did this. Look, we just made a trade deal where China is going to have to buy $250 billion a year in our products, … $40 to $50 billion from the farmers. Then all of a sudden you heard about this,” he told the press during a White House Coronavirus Task Force briefing.

“The question was asked: Would you be angry at China? The answer might be a very well resounding ‘Yes.’

“But it depends. Was it a mistake that got out of control? Or was it done deliberately? In either event, they should have let us go in.

“We asked to go in very early and they would not let us in,” Trump said.

It’s not clear if Trump was referring to the origin of the CCP virus or the regime’s lack of transparency about infections and deaths.

There are theories circulating that the virus may be connected to a biologic laboratory in Wuhan—the epicenter of the outbreak.

The United States is not the only country that has suggested it will review its relationship with the Chinese communist regime.

On Thursday, the UK foreign secretary and acting Prime Minister Dominic Raab said that Britain’s relationship with Beijing will no longer be “business as usual” after the COVID-19 pandemic is over.

“There absolutely needs to be a very, very deep dive after the event and review of the lessons, including of the outbreak of the virus,” Raab said at a press conference in London. “I don’t think we can flinch from that at all.”

When asked if there would be a “reckoning” with Beijing after the crisis ends, Raab, who is standing in for Prime Minister Boris Johnson as he recovers from the CCP virus, replied: “There’s no doubt we can’t have business as usual after this crisis, and we’ll have to ask the hard questions about how it came about and how it could have been stopped earlier.”

The CCP virus, which causes the disease COVID-19, has been linked to at least 159,510 deaths globally and infected over 2.3 million people as of Saturday night, according to official government data collated by Johns Hopkins University.

The numbers are considered inaccurate by many because of a lag in data collection by governments as well as significant underreporting of known cases and deaths by the regime ruling mainland China.

During the Task Force press briefing, a top doctor debunked the Chinese regime’s data on the CCP virus outbreak.

The mortality rate for the United States and Germany—11.24 and 5.25 respectively—fall at the lower end of reports.

However, China’s reported mortality rate, which was singled out with an asterisk, is suspiciously low at 0.33.

“I put China data there so you can see basically how unrealistic this could be,” Birx said.

The data from China includes the CCP’s recently revised numbers from Wuhan.

On Friday, Wuhan authorities increased their death toll reports by 1,290 to 3,869 cases. The authorities explained that the newly-added virus victims included some who died at home, The Epoch Times reported.

However, even with the revisions, Birx said she doubts that China could have a mortality rate magnitudes lower than the United Kingdom, France, Belgium, Italy, and Spain, given that they also have highly developed healthcare delivery systems, extraordinary doctors, nurses, and equipment.

Trump added that he believes the death toll in China should be much higher and the highest in the world: “China is number one by a lot. They are way ahead of us in terms of death.”