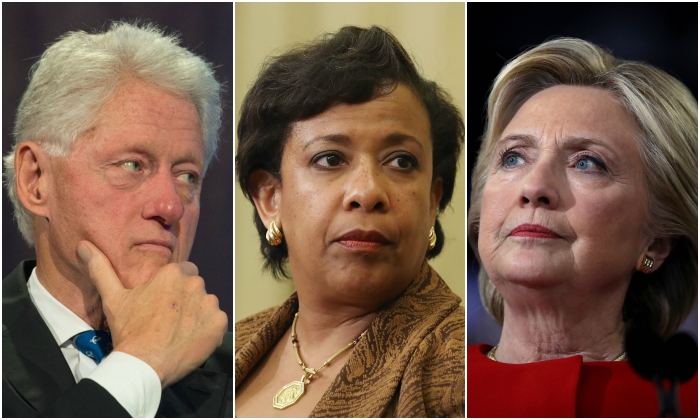 President Donald Trump suggested on Sunday that, during a controversial tarmac meeting in 2016, former President Bill Clinton offered then-Attorney General Loretta Lynch a seat on the Supreme Court in exchange for her leniency in the Hillary Clinton email investigation.

Trump tweeted his question hours before ABC aired an interview with former FBI Director James Comey, who said that he was worried when Lynch asked him to call the Clinton email investigation “a matter” in alignment with the Hillary Clinton’s campaign.

Comey’s interview came on the eve of the release of his book, where he wrote that Lynch’s behavior about the investigation was “very strange” and that classified information exists that would “cast serious doubt” on Lynch’s ability to investigate Clinton.

Comey throws AG Lynch “under the bus!” Why can’t we all find out what happened on the tarmac in the back of the plane with Wild Bill and Lynch? Was she promised a Supreme Court seat, or AG, in order to lay off Hillary. No golf and grandkids talk (give us all a break)!

“Comey throws AG Lynch ‘under the bus!’ Why can’t we all find out what happened on the tarmac in the back of the plane with Wild Bill and Lynch?” Trump wrote on Twitter on Sunday. “Was she promised a Supreme Court seat, or AG, in order to lay off Hillary. No golf and grandkids talk (give us all a break)!”

Lynch met with Bill Clinton on an airplane tarmac in Phoenix, Arizona, on June 27, 2016. That meeting turned into a political firestorm since Lynch was the head of the Justice Department investigating then-presidential candidate Hillary Clinton’s use of a private email server. Of the meeting, Lynch said that she discussed grandchildren and travels with Bill Clinton, not any investigations.

Four days later, Lynch would go on to say that she regretted the meeting and that she would accept whatever recommendations the Comey-led FBI would make in the Clinton-email probe regarding prosecution. Comey would go on to publicly exonerate Clinton. Months later, Comey would tell Congress that the tarmac meeting forced him to make the exoneration announcement public to “protect the credibility of the investigation.”

FBI agents were disappointed with Comey’s decision, sources close to the investigation told New York Post. In an unprecedented move, all agents working the case were required to sign a non-disclosure agreement.

“FBI agents believe there was an inside deal put in place after the Loretta Lynch/Bill Clinton tarmac meeting,” one source told the Post in mid-July 2016.

Lynch issued a statement ahead of Comey’s ABC interview on Sunday, saying that she called the Clinton email probe “a matter” in alignment with a Justice Department policy against confirming or denying the existence of investigations. She also said that she did not communicate about the investigation with the Clinton campaign or the Democratic National Committee.

In his tweet, Trump asks “why can’t we all find out what happened on the tarmac.” This likely refers to the fact that while Comey was the head of the FBI, his agency had said that no documents exist relating to the tarmac meeting. But in August 2017, three months after Comey was fired, the FBI produced more than 400 pages of tarmac-meeting emails. That batch of documents was limited to mostly communications between the public affairs staff and reporters with key parts redacted.

Though limited, the tarmac email release suggested that the Justice Department colluded with the media to spin the tarmac story and that the Obama White House was involved in coordinating the spin campaign.

Although it is unclear which seat on the Supreme Court Clinton could have offered, liberals have been asking Justice Ruth Bader Ginsburg to retire since as early as 2011 so that a younger judge could take her place while a Democratic president was still in office. Hillary Clinton wrote in her book “What Happened” that she thought that Ginsburg may have retired if Clinton won the election.