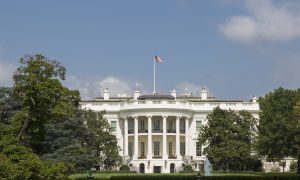 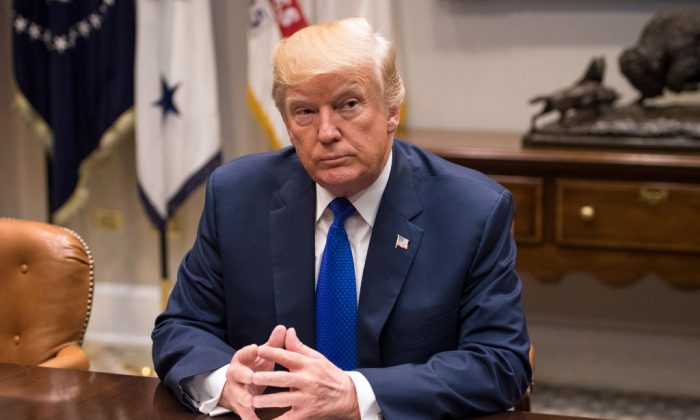 U.S. President Donald Trump speaks to the media during a meeting with congressional leadership in the Roosevelt Room at the White House on November 28, 2017 in Washington, DC. (Photo by Kevin Dietsch-Pool/Getty Images)
Politics

President Donald Trump on Sunday morning, Jan. 21, suggested a “nuclear option” in dealing with the government shutdown, which has lasted the weekend.

“Great to see how hard Republicans are fighting for our Military and Safety at the Border. The Dems just want illegal immigrants to pour into our nation unchecked. If stalemate continues, Republicans should go to 51% (Nuclear Option) and vote on real, long-term budget, no C.R.’s!” the president tweeted at 4:35 a.m. local time.

Great to see how hard Republicans are fighting for our Military and Safety at the Border. The Dems just want illegal immigrants to pour into our nation unchecked. If stalemate continues, Republicans should go to 51% (Nuclear Option) and vote on real, long term budget, no C.R.’s!

On Saturday, Trump said that the military is being held hostage.

“Democrats are holding our Military hostage over their desire to have unchecked illegal immigration. Can’t let that happen!” he tweeted.

The nuclear option, introduced by the Obama administration, overrides the Senate rule that requires 60 votes for legislation to pass.

In the House of Representatives, Republicans can pass legislation with their own members due to the size of their majority. They passed a bill on Thursday night to move a spending bill forward to keep the federal government open.

That same vote fell short in the Senate, where Republicans have a 51-49 majority. Most legislation requires bipartisan support. In this case, Republicans would need nine Democrats to flip.

“If ordinary rules prevailed, the majority ruled in the Senate, the government would be open as of today,” Office of Management and Budget Director Mick Mulvaney told CNN.

“The Republican Conference opposes changing the rules on legislation,” a representative for McConnell said in a statement Sunday, CNBC reported.

There is a fear among Republicans that if Democrats regain a majority in the Senate, they would be able to dramatically impact policy.

President Trump’s son, Eric Trump, meanwhile, stated that the Democrats are using the government shutdown “to distract” Americans from the president’s momentum.

.@EricTrump: "My father was elected for one reason, and that's because he actually believes in putting America first, which is overwhelming among the citizens of this country." @JudgeJeanine pic.twitter.com/8qKt8Bb199

“He’s gotten more done in one year than arguably any president in history,” he told Fox News. “Honestly I think [the shutdown’s] a good thing for us, because people see through it.”