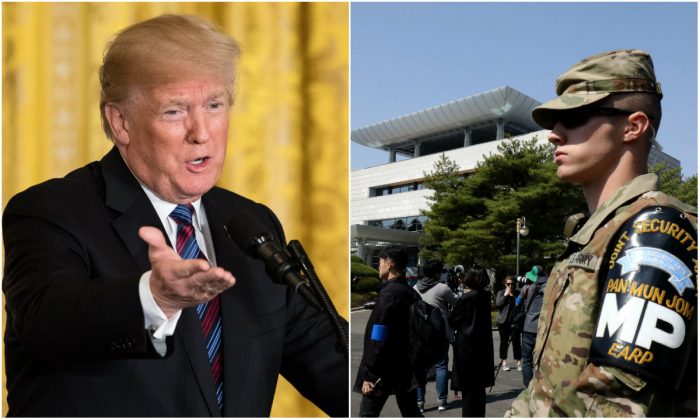 L: President Donald Trump in the East Room of the White House in Washington, DC, on April 3, 2018. (Samira Bouaou/The Epoch Times); R: A U.S. soldier in front of the Peace House at the South Korea-side of the the border village of Panmunjom between South and North Korea at the Demilitarized Zone on April 18, 2018. (Chung Sung-Jun/Getty Images)
Trump Administration

“Numerous countries are being considered for the MEETING, but would Peace House/Freedom House, on the Border of North & South Korea, be a more Representative, Important and Lasting site than a third party country? Just asking!” Trump wrote on Twitter Monday, April 30.

Numerous countries are being considered for the MEETING, but would Peace House/Freedom House, on the Border of North & South Korea, be a more Representative, Important and Lasting site than a third party country? Just asking!

The leaders of North and South Korea embraced on Friday after pledging to work toward “complete denuclearization of the Korean peninsula,” at the first inter-Korean summit in more than a decade.

In a historic move, the South’s president, Moon Jae-in, and the North’s communist leader announced they would work with the United States and China this year to declare an official end to the 1950s Korean War, which is still technically only on hold via a truce.

The main subject of a private walk and chat that Kim and Moon shared during their meeting was the upcoming meeting of Kim and Trump, a South Korean presidential Blue House official told media on Monday.

Trump said on Thursday he was considering several dates and venues for the upcoming talks that should take place in three to four weeks. The Monday tweet, however, was his first mentioning a specific place.

The Peace House lies in the Joint Security Area, also called Truce Village, in the village of Panmunjom, straddling the border.

The three-story structure was built in 1989 in the South’s part of the village and has served as a venue for peace talks between the two countries.

Aside from the Friday summit, the Peace House also hosted the Jan. 9 meeting where delegates of the North and South met to discuss the North’s participation in the 2018 Winter Olympics in Pyeongchang, South Korea.

Whatever the location, Trump’s meeting Kim would be a first between sitting leaders of the two countries.

Trump has put great emphasis on solving the growing threat on North Korea’s nuclear arms program and managed to mount unprecedented pressure on the communist dictatorship through intensifying sanctions and the credible threat of military action.

After North Korea’s bout of nuclear and missile tests last year peppered with threats and insults, to which Trump responded in kind, the North finally agreed, in January, to talk.

U.S. Secretary of State Mike Pompeo said on Sunday that Trump would maintain a “pressure campaign” of harsh sanctions on North Korea until Kim scraps his nuclear weapon program.

Late Saturday, Trump told Moon in a phone call that he was pleased the leaders of the two Koreas reaffirmed the goal of complete denuclearization during their summit, South Korean officials said on Sunday.

The White House said Trump and Moon had “emphasized that a peaceful and prosperous future for North Korea is contingent upon its complete, verifiable, and irreversible denuclearization.”