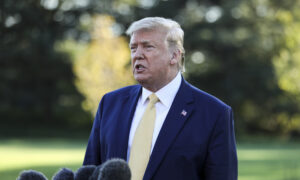 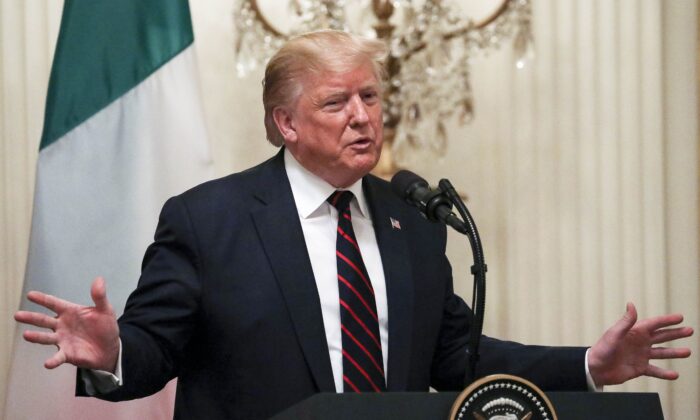 President Donald Trump said Kurdish fighters in northern Syria may have intentionally set some ISIS terrorist prisoners free as a political move against the United States.

“Very easy to recapture those people that probably the Kurds let go to make a little bit stronger political impact,” Trump said during an Oct. 16 press conference with Italian President Sergio Mattarella at the White House.

Trump said he moved more than two dozen U.S. troops away from northern Syria, as “they would have been in harm’s way” facing a military incursion long-planned by Turkey.

Turkey said it moved in to expel the Kurdish forces and establish an 18-mile “safe zone” in Syria along Turkey’s southern border for resettling millions of Syrians that fled to Turkey to escape the Syrian civil war.

Ankara considers the Kurdish forces in northern Syria, the Kurdish People’s Protection Units (YPG), as affiliated with the Kurdistan Workers’ Party (PKK), a terrorist group that has waged a decades-long insurgency in Turkey. Previous reporting from the area suggests there is at least some overlap between the PKK and YPG.

Trump said the troop withdrawal wasn’t a “green light” for Ankara to move in, pointing to his imposing sanctions on Turkey in response.

He stressed the United States has no interest in injecting itself militarily into a conflict between Turkey, a NATO member, and Syria, which is led by President Bashar al-Assad, who “is not our friend.”

Kurds Are ‘No Angels’

The quasi-socialist YPG has been fighting the ISIS terrorist group in Syria with U.S. military support.

But the shared goal of fighting ISIS doesn’t mean the Kurds don’t have issues of their own, Trump suggested.

“I say this with great respect—they’re no angels. Take a look at PKK. ISIS respects PKK. You know why? Because they’re as tough or tougher than ISIS,” he said.

“We’re making the Kurds look like they’re angels. We paid a lot of money to the Kurds. Tremendous amounts of money. We’ve given them massive fortunes. And you know what? It’s wonderful. They fought with us. But we paid a lot for them to fight with us.”

Upon the Turkish incursion, some ISIS prisoners escaped from detention in the Kurdish-controlled region, which Trump suggested was done intentionally.

“We were the ones that captured ISIS,” he said. “People let some go, they opened a couple of doors to make us look as bad as possible.”

The YPG-led coalition of Syrian forces stated that securing ISIS detention centers wasn’t its priority amid the Turkish attack.

Since the attack, the Kurds said they had reached a deal with Assad, whom they have previously opposed, to help fend off the Turks. Assad’s forces have already moved into the northern region, The Associated Press reported on Oct. 14.

Others ‘Can Kill ISIS’

Trump dismissed worries about a possible ISIS resurgence due to the Turkish attack. He pointed out that other major forces in the region, including Iran and Russia (which both back Assad), are also opposed to ISIS. Turkey “a little bit less so,” Trump said, possibly referring to claims that some former ISIS “elements” are now used by Turkey as its proxies.

Trump announced the start of a troop withdrawal from Syria in December 2018 upon declaring the end of ISIS’s self-proclaimed “caliphate.”

Trump said on Oct. 14 that the roughly 1,000 U.S. troops he had ordered out of Syria would remain in the Middle East to prevent an ISIS resurgence. Only a “small footprint” of forces will remain in Southern Syria, he said in a statement.

The United States maintains around 5,200 troops across the border in Iraq. Much of its campaign in Syria has been waged by warplanes flying out of Qatar and other locations in the Middle East.

The current conflict in Syria began in 2011 along with similar unrest in the Middle East during the Arab Spring protests. The Obama administration backed the opposition against Assad, trying to destabilize his regime, while Assad violently suppressed the protests against his regime. The resulting civil war created a breeding ground for terrorists, allowing for the rise of ISIS.