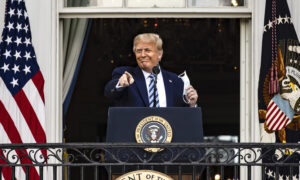 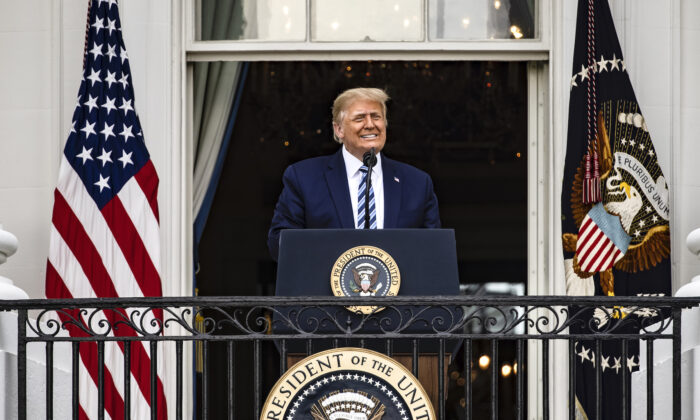 President Donald Trump addresses a rally in support of law and order on the South Lawn of the White House in Washington on Oct. 10, 2020. (Samuel Corum/Getty Images)
AMERICA

Trump Suggests He No Longer Has CCP Virus: ‘Very Good Shape to Fight’

President Donald Trump suggested on Oct. 11 that he no longer has the CCP (Chinese Communist Party) virus, saying he is in “very good shape to fight.”

“I can go way out of a basement, which I would have done anyway,” Trump told Fox News in response to whether he has the virus. White House doctors haven’t released information showing whether the president has tested negative.

“The president is in very good shape to fight the battles,” Trump said. “I beat this crazy horrible China virus … I passed the highest test, the highest standards, and I’m in great shape. And I have to tell you, I feel fantastically. I really feel good.”

On Oct. 10, Trump made his first public appearance since he was diagnosed with the virus, which originated in mainland China last year. He delivered an address in support of law enforcement, speaking from the Blue Room balcony at the White House.

Footage showed Trump wearing a mask as he walked out for the speech, later taking it off before he spoke to supporters.

“I want you to know our nation is going to defeat this terrible China virus,” Trump told the crowd. “We’re producing powerful therapies and drugs, and we’re healing the sick and we’re going to recover, and the vaccine is coming out very, very quickly.”

Trump, at the event, also defended the administration’s response to the pandemic when he closed down travel with China in response to the virus, earlier this year. Both Trump and Vice President Mike Pence, in their respective debates, accused Democrats of downplaying the severity of the virus in February and March, and asserted that Democrats accused Trump of “xenophobia” and racism for shutting down travel with the country.

His campaign has said he’s preparing for a rally in Florida on Oct. 12 as well as campaign stops in Pennsylvania and Iowa days later.

On Oct. 11, the president responded to critical comments about whether he should have held the Oct. 10 event.

“The White House doctors are the best … they said totally free of spreading, there’s no spread,” Trump told Fox News.

“The president, I was on the phone with him three or four times yesterday, and he is hard at work. He’s ready to go. He wants to talk to the American people and he wants to be out there,” she said on “Fox & Friends” on Oct. 9.

The president’s physician said in a memo late on Oct. 10 that Trump is no longer considered a transmission risk and doesn’t have to continue self-isolating.

“Now at day 10 from symptom onset, fever-free for well over 24 hours and all symptoms improved, the assortment of advanced diagnostic tests obtained reveal there is no longer evidence of actively replicating virus,” Dr. Sean Conley wrote. “Moving forward, I will continue to monitor him clinically as he returns to an active schedule.”