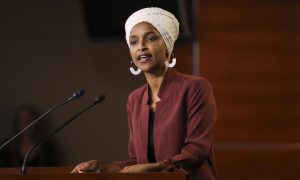 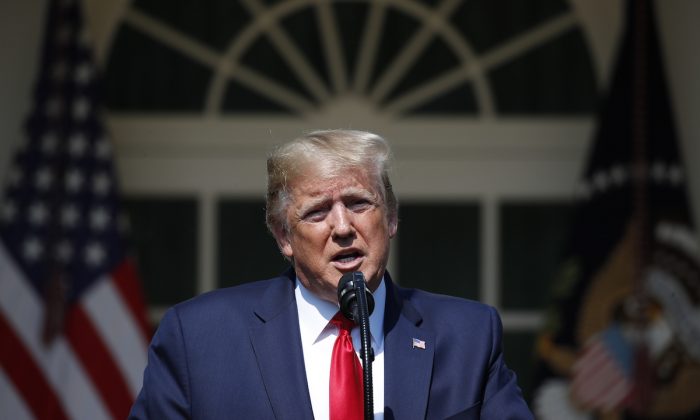 President Donald Trump speaks before signing H.R. 1327, an act ensuring that a victims' compensation fund related to the Sept. 11 attacks never runs out of money, in the Rose Garden of the White House in Washington on July 29, 2019. (Alex Brandon/AP Photo)
Trump Administration

The lawsuit was filed in the U.S. District Court for the Eastern District of California and alleges that the law adds an “unconstitutional qualification” to the prerequisites listed for candidates in the Constitution.

“The Democratic Party is on a crusade to obtain the president’s federal tax returns in the hopes of finding something they can use to harm him politically,” the lawsuit states, according to CBS. “In their rush to join this crusade, California Democrats have run afoul of these restrictions on state power over federal elections.”

The Republican National Committee and Judicial Watch also sued California over the law.

“It certainly doesn’t bode well for Democrats heading into 2020 that their best bet for beating President Trump is to deny millions of Californians the ability to vote for him. This stunt by Democrats is unconstitutional and, simply put, desperate,” she said in a statement.

Newsom posted on Twitter that there was an easy solution to the issue.

“There’s an easy fix Mr. President—release your tax returns as you promised during the campaign and follow the precedent of every president since 1973,” he wrote.

There’s an easy fix Mr. President — release your tax returns as you promised during the campaign and follow the precedent of every president since 1973. https://t.co/XodBK9ScqB

Senate Bill 27, or the Presidential Tax Transparency and Accountability Act, requires candidates for president of the United States and the governor of California to file copies of every income tax return filed with the Internal Revenue Service in the five most recent taxable years with the Secretary of State at least 98 days prior to the corresponding primary election.

Newsom signed the bill on July 30.

“These are extraordinary times and states have a legal and moral duty to do everything in their power to ensure leaders seeking the highest offices meet minimal standards, and to restore public confidence. The disclosure required by this bill will shed light on conflicts of interest, self-dealing, or influence from domestic and foreign business interest,” Newsom, a staunch opponent of Trump, wrote in a statement after signing the legislation.

Jay Sekulow, counsel to the president, said in a statement that “the State of California’s attempt to circumvent the Constitution will be answered in court.”

Tim Murtaugh, an official with Trump’s 2020 campaign, said the law was unconstitutional.

“The Constitution is clear on the qualifications for someone to serve as president and states cannot add additional requirements on their own,” Murtaugh said in a statement. “What’s next, five years of health records?”

Trump administration officials have said that Trump does not have to release his tax returns.

“Today we require tax returns, but what would be next? Five years of health records? A certified birth certificate? High school report cards? And will these requirements vary depending on which political party is in power? A qualified candidate’s ability to appear on the ballot is fundamental to our democratic system,” he wrote.

“For that reason, I hesitate to start down a road that well might lead to an ever-escalating set of differing state requirements for presidential candidates.”