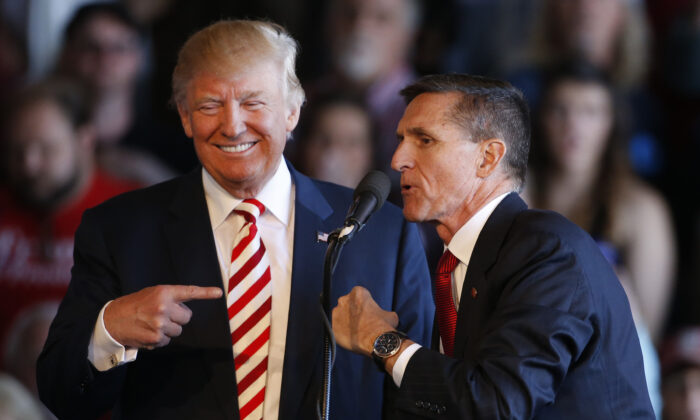 Flynn pleaded guilty in December 2017 to lying to the FBI. In recent months, however, he’s asked District Judge Emmet Sullivan, who presides over his case, to allow him to withdraw his plea, saying his previous lawyers provided him ineffective assistance. Flynn also has repeatedly accused the government of misconduct related to his case.

“So now it is reported that, after destroying his life & the life of his wonderful family (and many others also), the FBI, working in conjunction with the Justice Department, has ‘lost’ the records of General Michael Flynn,” Trump said in a March 15 tweet. “How convenient. I am strongly considering a Full Pardon!”

So now it is reported that, after destroying his life & the life of his wonderful family (and many others also), the FBI, working in conjunction with the Justice Department, has “lost” the records of General Michael Flynn. How convenient. I am strongly considering a Full Pardon!

“General Flynn is honored by the President’s concern and awareness of this egregious injustice against him, his family, and the American people,” Sidney Powell, a former federal prosecutor and Flynn’s lead lawyer, responded in an email to The Epoch Times.

It isn’t clear what lost records Trump was talking about, but it might have been a reference to the original FBI report from the Jan. 24, 2017, interview, in which Flynn allegedly lied about his conversations with then-Russian Ambassador to the United States Sergey Kislyak.

FBI agents are required to complete an FD-302 report of their interviews within five days. But the earliest 302 draft provided to Flynn is from Feb. 10, more than two weeks after his interview.

Powell previously said she found a witness who saw an earlier draft of the 302.

“I’ve now found a witness who says the original 302 did, in fact, say that Flynn was honest with the agents and did not lie,” she told Larry O’Connor on his WMAL radio show on Jan. 16.

The prosecutors previously said any earlier drafts were not in their possession. Sullivan sided with them, saying sometimes documents go “missing.”

But Powell rejected that idea.

Neither the bureau nor its digital document system “loses the most important of its reports that is supposed to support the federal felony of the President’s National Security Adviser,” she said in a court filing.

Powell has argued that the FBI’s investigation of Flynn was a pretext to target Trump.

The bureau opened a case on Flynn in August 2016 on suspicion that he “may wittingly or unwittingly be involved in activity on behalf of the Russian Federation which may constitute a federal crime or threat to the national security.”

According to Powell, that was nonsense.

Flynn used to head the Defense Intelligence Agency and kept the agency informed of his foreign contacts, including a paid interview he gave in Russia in 2016.

Former FBI Director James Comey alleged that on Feb. 14, 2017, Trump told him: “I hope you can see your way clear to letting this go, to letting Flynn go. He is a good guy. I hope you can let this go.”

Comey said he interpreted it as Trump asking him to drop an active investigation.

Based on this, the FBI probe of Flynn and several other Trump associates was handed over to a special counsel, former FBI head Robert Mueller, who then hired former prosecutor Andrew Weissmann to lead his team.

Weissmann was one of the chief villains in Powell’s 2014 bestseller, “Licensed to Lie,” a critique of prosecutorial misconduct within the DOJ.

The Mueller probe scoured Trump’s presidency for nearly two more years before he concluded that the evidence was unable to establish that any alleged Trump–Russia collusion occurred.

But Mueller shouldn’t have been appointed to begin with, Powell said during a March 11 speech at Hillsdale College.

Not only did the FBI agents think Flynn didn’t intentionally lie during the interview, but less than a week later, the DOJ produced a memo that cleared Flynn of the suspicion that he was a Russian agent, Powell said.

“According to an internal DOJ memo dated January 30, 2017, after the Jan. 24 interview, the FBI advised that, based on the interview, the FBI did not believe Flynn was acting as an agent of Russia,” Mueller’s team wrote to Flynn’s previous lawyers in a 2018 letter obtained by Just the News.

When Trump allegedly talked to Comey about Flynn, the investigation was already supposed to be over, according to Powell.

“The Mueller-Weissmann team and evil actors in the FBI and DOJ had to concoct the case against Flynn to keep their obstruction hoax alive against the President,” Powell said.

“That’s what it was really about. Flynn was the tip of the spear to try to destroy Trump. This persecution is an outrage and a blight on the entire justice system. No one can have any trust in the FBI or DOJ until this is corrected.”