Trump Strikes Oil After Russia Moves to ‘Cripple’ US Shale 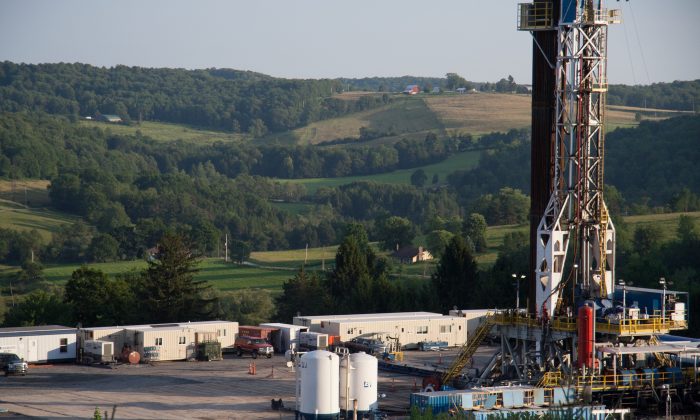 At a press conference in the White House Rose Garden on Friday, President Trump stated that his administration would orchestrate the purchase of large quantities of crude oil to help the struggling U.S. oil industry and build up strategic national reserves.

“Based on the price of oil, I’ve also instructed the Secretary of Energy to purchase, at a very good price, large quantities of crude oil for storage in the U.S. Strategic Reserve,” said Trump. “We’re going to fill it right up to the top, saving the American taxpayer billions and billions of dollars, helping our oil industry and making us even further toward that wonderful goal which we’ve achieved, which nobody thought was possible, of energy independence. It puts us in a position that’s very strong, and we’re buying it at the right price. And that’s something that would have not even been possible a week ago. The price of oil went down quite a bit. So we’re going to fill it up. It’s a good time to fill it up.”

Our economy and workforce is more resilient than ever before, and we will bounce back. To provide relief, @POTUS has directed me to use the U.S. Strategic Petroleum Reserve to purchase American crude oil for storage. pic.twitter.com/kFgA33PfzL

Energy Secretary Dan Brouillette subsequently tweeted that “The Strategic Reserve has the capacity to store up to 77 million additional barrels of crude oil, which will provide needed relief and confidence to global oil markets.” With benchmark Brent crude coming in at just over $33 per barrel in Friday trading, the administration’s measure would have a price tag of over $2.5 billion.

The Trump administration earlier this week had condemned efforts by “state actors” to “manipulate and shock oil markets.” The statement came after Russian negotiators walked away from talks last weekend on cutting production with the Organization of the Petroleum Exporting Countries (OPEC). OPEC members Saudi Arabia and the United Arab Emirates (UAE) then retaliated by slashing prices and flooding oil markets with crude products, leading to already-strained oil prices plummeting over 30 percent during trading this week.

Saudi Arabia and Russia are arguing over the price and flow of oil. That, and the Fake News, is the reason for the market drop!

Director of commodity research at waterborne energy analysts ClipperData, Matt Smith, told CNN in an interview that “This is a response to try to cripple the U.S. shale industry.”

US Pushing Russia Back

The Trump administration holds the view that the Nordstream 2 gas pipeline project is a Russian attempt to undermine Ukraine’s historical position as a strategic gas-transit country. Nordstream 2 connects Russia directly to its main natural gas customer, Germany, with a second pipeline laid along the floor of the Baltic Sea. Nordstream 1 and 2 thus bypass existing Ukrainian pipeline networks, depriving Ukraine of critical transit charges and geopolitical bargaining power in the longer term.

The White House imposed sanctions in December on companies involved in constructing the Nordstream system, which was merely weeks away from completion at the time. Swiss sea-bed pipe-laying specialist Allseas Group SA was thus forced to pull out of the project with only a few miles of sub-sea pipeline to go, leaving the project in disarray. The United States remains strongly opposed to German over-reliance on pipeline gas from Russia and has sought to reduce Russian geopolitical influence in Europe by offering American liquid natural gas (LNG) as a stable alternative.

Similarly, U.S. officials announced sanctions in February against Geneva-based but Russian-controlled oil brokerage Rosneft Trading S.A., which they say has been helping the Venezuelan regime to skirt the American oil embargo by acting as an intermediary to supply Venezuelan oil to third parties in Asia.

Since their Vienna Agreements of 2016, the uneasy OPEC+ axis had ensured oil prices remained both relatively high and stable by cutting back on supply. However, this policy had the unintentional effect of allowing American producers of more expensive non-conventional (i.e., fracked) oil and gas to garner ever more market share, as the inflated prices helped the U.S. frackers compete against their low cost-base conventional—i.e., Russian and Saudi—competitors.

As the shale revolution gained momentum and interest rates remained low, however, U.S. producers borrowed extensively to finance expansion plans and to continue to drill fracking wells. Unlike conventional oil and gas wells, where productive well lifetimes are often measured in decades, the productivity of fracked wells declines precipitously over the first few years of operation, before the well is eventually abandoned. American frackers are thus forced to continue expensive drilling operations almost indefinitely, leading to a substantially higher cost base.

Those shale producers with the highest debt levels will be hardest pressed to save cash by ceasing drilling operations and laying off workers. However, Moody’s analysts expect that investors will demand even higher risk premiums for investing in fracking going forward, given low prices and uncertainties surrounding the Coronavirus and any imminent global recovery. “Refinancing costs will remain sky-high for these producers without a sharp rebound in gas prices.”

“These guys were already in pain,” said Smith at ClipperData. “Now, we are going to start to see bankruptcies, perhaps widespread.”

It remains to be seen whether the Trump administration’s support measures can stave off the worst for a sector caught in a perfect storm.

CNN and Reuters contributed to this article.